>>SEE ALL PICTURES FROM TODAY HERE! Have you ever taken a road trip down Interstate 90 across South Dakota? If... 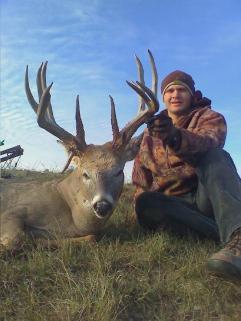 >>SEE ALL PICTURES FROM TODAY HERE!<<

Have you ever taken a road trip down Interstate 90 across South Dakota? If you have I’m sure one of your first thoughts is that South Dakota has a whole lot of nothing. There are oceans of grass for as far as you can see with little change in the topography except for the hiccup of the occasional river or creek bottom. Heck, it’s where Laura Ingalls Wilder wrote her experiences to create the “Little House on the Prairie” series of books. It’s also the reason South Dakota is the undisputed title holder of “Pheasant Capitol of the World.” As a side note, it’s going to be another barn burner of a year in pheasant country. Don’t miss it.

In the pheasant country east of the capital of Pierre you’ll find much of the same. Grass and agriculture as far as you can see. You’ll also find big bucks hidden in the fields and swales of this monotonous landscape. I was reminded of this with two E-mails sent to me in the past few days, both from central South Dakota and both bucks were taken in locations minutes apart according to the notes I received.

The first photo is of an impressive 5×6 buck taken on September 30th by a lucky bowhunter approximately one hour east of Pierre. The mature buck reportedly scored 174 1/8 points and this was only this hunter’s second year of bowhunting. What makes the story even more remarkable is the fact this novice bowhunter tagged a whitetail his first year that scored 171 3/8 points. At some point he’s going to have to come down from that cloud, but for now he deserves to enjoy the adrenalin.

This second photo is also from the same region, likely within 30 minutes of where the 174 1/8-point was taken. From the date on the photo it appears the buck was taken around the 11th of October. That’s all I have on this buck, but from the looks of the antlers this is a mature buck, especially when you scrutinize the mass this tall-tined brute sports. And if you like tall brow tines, you’ll be memorized by the giants on this dude.

South Dakota is no sleeper for whitetails. In fact when you analyze the data provided by Boone and Crockett, South Dakota was in the top 10 of states for trophy bucks from 1830 through 1979. That status is coming back as more and more hunters manage property for trophy bucks. For whitetails you have numerous options to choose from for trophy potential. The two highest Boone and Crockett producing counties include Gregory County and Brown County. Gregory’s rugged terrain choked with draws of bur oak, ash and juniper creates ideal escape cover. Brown County lies in the midst of the prairie pothole region and bucks grow big there by hiding in cattail sloughs and wetland habitat when hunting pressure picks up.

Of course the great grasslands where these two brutes hid out also can help a buck escape until maturity. I’m a native of South Dakota so I’m somewhat biased, but the state has more to offer than cackling pheasants and these photos prove it.

>>SEE ALL PICTURES FROM TODAY HERE!<<