I’m sure some of you have heard of hunting Indian reservations and maybe a few of you have tried it... 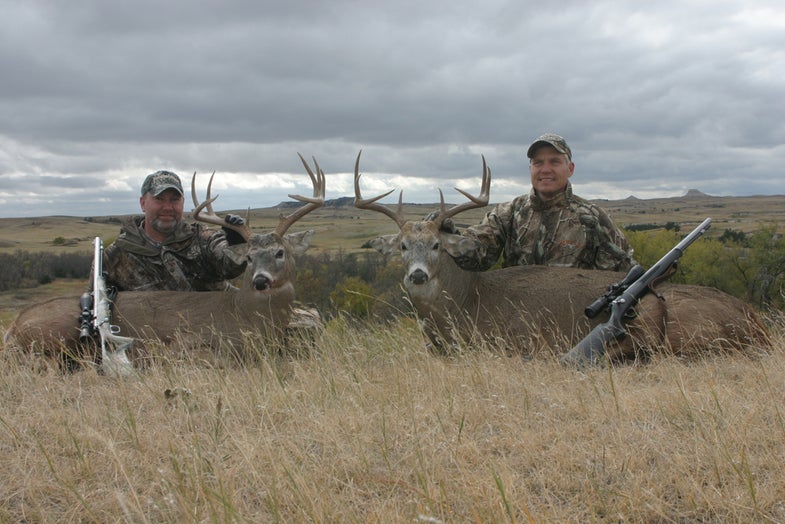 I’m sure some of you have heard of hunting Indian reservations and maybe a few of you have tried it for turkeys or possibly prairie dogs. Have you thought about hunting them for big game? I just returned from a big game hunt in South Dakota where we hunted whitetails on tribal lands. The hunting was great and South Dakota, like several Great Plains states, has several reservations within its borders to choose from for deer action.

I was a guest there on a hunt sponsored by Traditions muzzleloaders (traditionsfirearms.com), Hornady bullets (hornady.com), Code Blue Scents (codebluescents.com) and Trijicon riflescopes (trijicon.com).

After tagging out on a great mule deer with my Mathews bow, I switched to a muzzleloader and on my first night out was presented an opportunity. Snow was falling and visibility was reduced by gusty winds, but it was the perfect recipe to get me into 100 yards of a great looking 5×5 buck. When the buck turned broadside I lit the powder and lost the buck in a blur of smoke. When it cleared I saw the buck bound off for two seconds. To make a long story short, I looked that night and most of the next morning, but could find no sign of a hit. I went back to camp and soon discovered my problem. I had sighted in my muzzleloader with an open container of pellets and opened a new one for the hunt. They were the same pellets, but for some reason the new pellets shot low.

I didn’t get a buck, but two of my hunting partners, Lee Hetherington, vice president of consumer publishing for Grand View Media and Mike Mattly, public relations manager for Pradco Outdoor Brands faired better. They both tagged out on the same deer drive through a dense thicket of riparian cover. Mike made a great running shot on a 5×5 buck and Lee’s buck stopped for standing shot to end his hunt.

If you’re serious about looking for new hunting opportunities check out tribal options. You might find them in your backyard or across the country, but there are ample resources to research. Many of the larger reservations and tribal holdings are found in the West, but the East also holds a share of the tribal land wealth. The Bureau of Indian Affairs works with 562 federally recognized tribes with approximately 326 Indian land areas administered as Indian reservations, pueblos, missions, villages and other designations. Some are small holdings while others are massive consisting of millions of acres of land. All don’t have whitetails, but those in the Heartland and the edge of the West hide a surprising number of whitetails.

As a native of South Dakota and a veteran of years of tribal hunting I can offer a few tips. First, do research the hunt thoroughly and do it early. License application deadlines are often early in the year and can be complicated. You also need to order maps and get clarification on where you can hunt and can’t hunt. Inquire whether a tribal guide is required and if not; ask if any are available for a consulting fee to get you started. I’d also suggest a summer trip to cement your scouting. You can combine that with a prairie dog shoot or even a tourist vacation.

Tribal hunting is definitely an option for a trophy whitetail. I’ve taken several great bucks on tribal hunts and on deeded lands adjoining tribal plots so I know the potential is definitely available on America’s Indian reservations.