What Deer Are Doing Now

Four days in the stand last week in northern Missouri turned out to be more of a clinic on how... 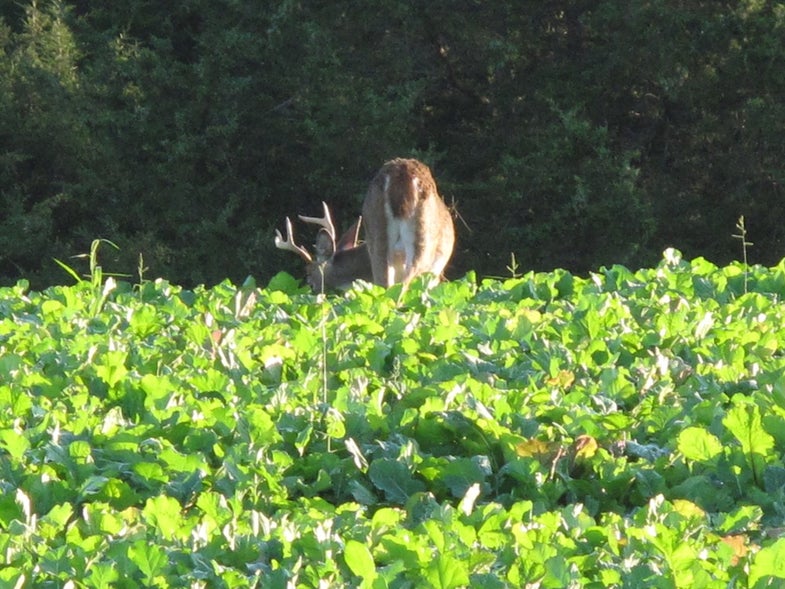 Four days in the stand last week in northern Missouri turned out to be more of a clinic on how to manage land, control human scent and grow amazingly big deer than on how to actually kill one of those big deer. Though that was no fault of my host, David Forbes, of Hunter’s Specialties.

He sprayed me down with bottles of Scent-Away and delivered me via silent-running golf cart to a number of well-placed stands on his Show-Me-State property. In those four days of hunting, I saw no less than five bucks that were clearly the biggest I had ever seen from a stand and well over a dozen, any of which had I been lucky enough to tag, would have been counted among my best deer with a bow or a gun! And in the spirit of full disclosure, I had at least a half dozen bucks that I could have arrowed (and one that I should have), all of which would have definitely been my biggest with a bow. But as impressive as a 135- to 140-inch racked whitetail remains, after watching a bruising 170-class 12-point from just 46 yards away (to far for this boy to comfortably fling an arrow) my first evening, I admittedly got a little greedy and wanted nothing less.

As a result, I got nothing. Though my will did break on a beautiful 10-point that jogged past my stand the final 30 minutes of hunting light the last evening. Accepting that a 170-inch buck would have to remain a dream, I grunted to get the consolation buck to stop long enough for a shot down between two leafed out branches. I must have rushed the shot, for my arrow caught a limb and landed harmlessly in the field of H.S. Fall Mix only to spook the buck, which ran about 20 yards, looked back as if wondering “What the heck was that?” and then slowly fed off out of sight with a doe and another wide, beefy 8-point that ambled out right after I triggered my release.

“It’s early in the season,” I told myself on the return to Forbes’ house. “Still plenty of hunting left…though just not here!” (The discussions that go on in my head at the conclusion of an unsuccessful stretch of hunting would make a schizophrenic seem mentally intact.)

What did come from four solid days of sitting in a treestand was a clear picture of what deer are doing right now leading up to the rut. It jived pretty solidly with reports I’ve gotten from fellow hunters in Virginia, in the upper Midwest and even across other parts the South and Northeast. For the hunter heading into the woods this week and next, it’s going to be important to know how to set up.

Coming out of summer, deer feed like crazy in preparation for the rut. Most bucks are still roaming in bachelor herds and does with fawns wander about in groups of three or more. As bow seasons begin to open in mid and late September in some places, deer are still in these patterns. Calls, grunt tubes or rattling, are virtually useless at this point unless you simply want a deer to look in your direction.

What I saw in Missouri in the mornings was deer returning from large fields well after the sun had come up and heading for acorns deeper in the woods before bedding later in the morning. In the evenings, hunt the fields, man. If you have a good-sized field away from a road where gawking drivers tend to stop and look at big bucks, whether it is planted with a deer mix or ag crops such as soybeans or cut corn, get on those field edges and set up close to where your scouting has revealed numerous whitetails entering and exiting the field.

The bigger bucks are starting to leave the bachelor groups and sparring is starting to ramp up between all of the average-sized to smaller would-be suitors. In just the four days I was hunting, I saw sparring go from just light tickling to moderately more aggressive battles. I’m sure it’s picked up a little more in the past week.

Calling a buck in still isn’t going to work worth a darn, but if you’re determined to give a try, stick with just some light tickling of your rattle bag or handheld rack. Bottom line is, for right now in most places, you still want to hunt the food. I was amazed to see bucks and does feeding voraciously on turnips, ripping them from the ground, despite their being more of a late season food. However, when brassicas were planted next to clover, the deer would feed briefly through the typically winter food and hang out in the clover. The lesson there, if you have numerous plantings on your property or lease, focus on the clover or other warm weather foods deer prefer.

I know a lot of guys dawdle before heading out, taking their time and just trying to nab a buck at last light. Unless you’re in one of the few areas where guns are already allowed (low country of South Carolina comes to mind), deer should not be pressured much yet. They’ll come early to feed, so you need to be on your stand, by 3 at the latest. Many days, deer were already in the fields when we arrived.

Oh, and when hunting mornings right now–be patient. If you’re back in the woods sitting on a white oak dropping acorns, give deer time to finish out in the fields and work their way to where you are. It’s not unusual for deer to still come feeding through a spot at this time of year as late as two or three hours after sunup. And don’t ignore a deep woods food plot or deep field edge (even though most people say save the open areas for the evening) if you can get to them quietly without walking through the plot or field on the way in. Deer will pass through these spots on their way back to bed for the morning.

In another week or two, you can scrap all of this and will need to rethink your stands and tactics to adjust for the changing behavior that will be taking place as the rut draws closer.