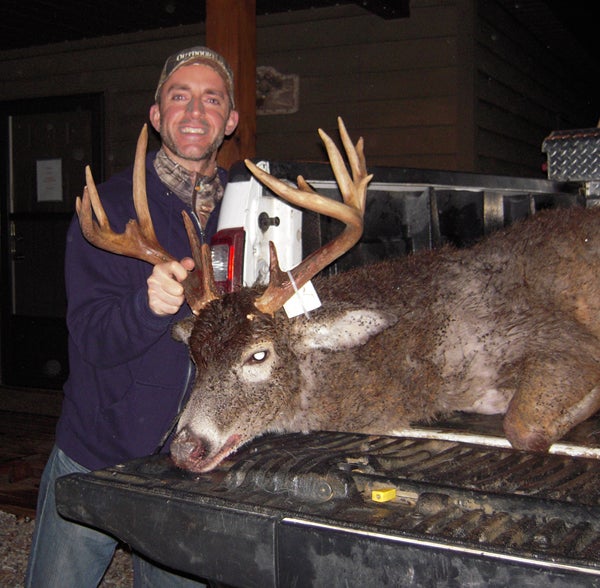 It’s 1:24 and I am writing this from camp. I shot a buck this morning in the pouring rain and made a less than perfect shot and we decided to back out of the area and go back to get him this afternoon. The waiting is driving me insane. I keep re-creating the moment in my head….

When I strapped myself into the stand this morning it was windy and pitch black…but miraculously it wasn’t raining. I was praying that a buck would cruise by before the rain started up again! I was sitting on top of a ridge along the edge of a grassy field. There was a deep hollow behind me and an old fence that ran along the property line approximately 50 yards to my left.

My guide, Scott, had told me he expected cruising bucks to travel along the fence line and there was a good chance that I’d see one. At first light I glassed a couple doe in the neighbor’s field, and they proceeded to walk through the opening in the fence and right past my stand. About 7 a.m. the skies opened up and it started raining sideways. A small 8 point came along the fence line and walked under my stand at 18 yards. Day after day of constant rain takes a toll on morale, but having deer come by your stand keeps your hopes up because the next one could be a shooter. I glanced over my shoulder and looked back into the hollow and I caught a glimpse of movement amongst the trees…then I saw antlers…BUCK!

He was heading in the wrong direction and eventually hopped over the fence and fed his way into the neighbor’s field. I remember thinking that he was a nice 8 point, not really long in the tines, but a good deer nonetheless. I decided to blow a few grunts on my Primos Buck Roar and his head snapped in my direction. He started walking toward the opening in the fence and my heart rate went into overdrive. Unfortunately he turned at the last minute and headed for the thicket on the other side of the fence, so I hit the grunt again and it appeared to startle him. He jumped into the woods and I thought I’d lost him. I grabbed “The Can” out of my pack and made a few bleats and then one more grunt and was about to kick myself for scaring the deer when he popped back into view. He was coming straight toward me! As he drew closer I noticed that he looked bigger and had a split brow tine. I made the split-second decision to shoot as he ducked behind a deadfall, and when he emerged on the other side I stopped him and let the arrow go. I am right handed and keep my safety-harness tether pretty tight. When I drew my bow (the buck was to my right and almost behind me) I was twisting into my harness with my right arm. At the shot my body “uncoiled slightly” and I pulled the shot further back than I would have liked.

And here I sit.

Eric, Mike and Pete are back in the woods (getting wet), and I am eagerly awaiting an update.

I am a happy camper–both my buck and I are back at camp and we are celebrating with a few Bud Lights. We went back to recover him right before dark and by time we pulled him out of the deep draw it was dark so the photos are not ideal. I promise to post proper photos tomorrow. After all of this rain, the ground is muddy and slick and we had a heck of a time getting him out. We fortunately were able to get the buggy close enough where the winch could reach down to pull him out of the bottom. I don’t know what we would have done if we couldn’t get that winch on him. He is a 130-class 8 main-frame 8 point with split brow tines and a total of 14 points. We estimate him to be 5+ years old and he has a couple of broken points. I am thrilled to have taken a mature deer with such character. I am pulling for my friends and I really think they are going to have success tomorrow. So far my buck is the only one in camp.

It pays to stick it out through the bad weather. Perseverance pays.