SEE ALL THE PICTURES HERE! I’ve been running a number of trail cameras on my property this pre-season trying to... 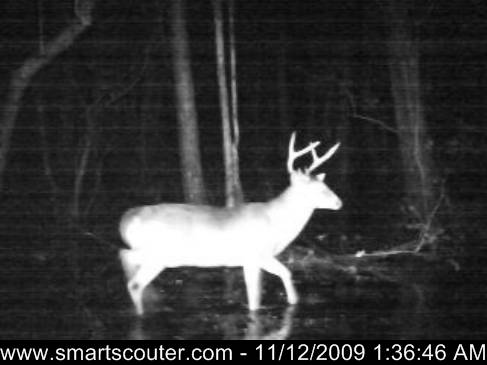 SEE ALL THE PICTURES HERE!

I’ve been running a number of trail cameras on my property this pre-season trying to do an extended test on battery performance, trigger speed and overall image quality as an off-shoot of a story I worked on earlier in the year. Some of the models I’ve been checking out include Bushnell’s compact Trophy Cam, the Cuddeback Capture IR, the Moultrie GameSpyi60, the Stealth Cam Prowler, the Reconyx Rapidfire and the high-end SmartScouter.

I have to admit, I’ve been impressed by them all, but one of the ones I’ve had the most fun with, simply because of it’s functionality is the SmartScouter. That’s the camera that emails an alert every time it snaps a photo so that you can check your account on smartscouter.com and review the photos from any computer or for that matter, web-compatible mobile phone.

I moved my SmartScouter on Monday to a spot along a swamp edge on my property where deer frequently travel. Though we had plenty of rain over the summer, it wasn’t so much that the swamp’s water levels rose. In fact, it’s been outright dry. This area pictured, known as the Boat Landing, wouldn’t have been suitable for any boats being launched for quite some time. But with a classic nor’easter rolling in. That has changed quickly and I’m now having to consider a rescue mission for my SmartScouter.

Check out these photos of the Boat Landing from less than a 24-hour period between the morning of Nov. 11 to the morning of Nov. 12. The first photo you’ll note, shows a nice, leave-strewn ground. That night at 1:36 a.m., the camera captured a buck no doubt fleeing a flooding bedding area. The water is up to his knees, I would guess, around 8 to 10 inches deep. At daylight the next morning, the water is easily up over a foot deep and we still have two days of rain ahead.

My trail cam is hanging about 3 feet high, a decision I am now regretting since I moved it from a tree on higher ground into a more direct travel route that is within the flooded area.

The weather folks keep comparing the flooding potential of this storm with Hurricane Isabel some years back. Isabel left nearly half of my property under several feet of water. I know the SmartScouter is water resistant, but can it stand a total submersion? If I don’t make it out there today to get it, the cam may well receive the ultimate water torture test yet.

SEE ALL THE PICTURES HERE!