Game On in the Northeast

Although warmer weather for the early part of this week threatens to slow things down a bit, bucks seem to... 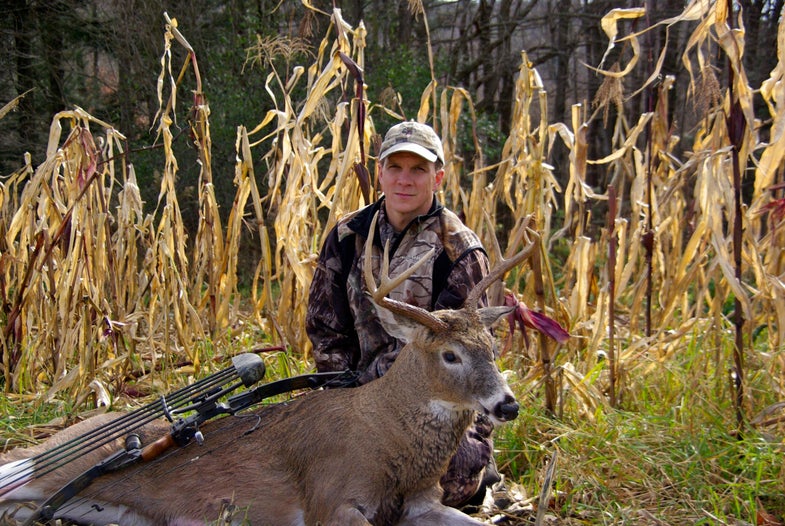 Although warmer weather for the early part of this week threatens to slow things down a bit, bucks seem to be on the move in many parts of the country right now as chase-phase activity kicks into gear. Buddy George Hamilton sent this treestand report from Friday...

Had a great morning today. The temperature was just below freezing and the winds were not too bad and out of the NW which was perfect for my setup. Off and on throughout the morning, there was a light snow coming down. Conditions seemed perfect and historically, November 6 has proven to be a good day to be in the woods. It felt like the rut to me!

Saw my first deer, a doe, at 7:57. She was running and then stopping and looking behind her–all while her tongue was hanging out and she was gasping for air. I got ready, fully expecting a buck to be trailing her. However, nothing showed up behind her until about a 1/2 hour later. A small 5-pointer came through the woods like a goofy bird dog. He was cutting back and forth trying to follow her scent. When he got about 20 yards from the stand I grunted to him. He stopped in his tracks and looked around for the other “buck.” I grunted again and he turned and walked right under the stand. I grunted a couple more times just to play with him, but he decided the doe was more interesting and he took off on a trot to find her.

About 7 minutes later he was back. This time he came down the hill and was still trotting and quartering back and forth trying to work out her scent trail. He went down the hill to where I last saw her. After that, I decided to hit the grunt call and/or the can call every 15 to 30 minutes. At about 9:15 I did two grunt calls. At about 9:18 I saw a rack buck coming down the hillside toward me. He was about 80-90 yards away when I first saw him. I grunted and he stopped and looked down the hill. I grunted again and he made a 90-degree turn and started walking on a straight line right toward me! At about 45 yards he stopped and was looking down the hill for the source of the grunt. I grunted again and he flicked his tail and started walking right toward me again. He stopped at about 20 yards and just stood there for a few seconds, looking around. He started walking again I drew back when he went behind some tree trunks. When he stepped out he stopped at about 10 yards and I released the arrow.

It was a pass through and he spun and ran about 40 yards and went down! Because Mass. now allows us to shoot two deer on the same day, I nocked another arrow and sat for about a 1/2 hour. At that point I decided to get down and start getting the dead deer out of the woods. Just as I stepped off of the last tree step I saw another rack buck walking right toward me! He got about 30 yards away and caught the scent of the dead buck and the he spotted it. His attention became totally focused on the dead deer and he stood in one spot for about ten minutes. I was able to put my release back on, unhook my bow from the pull up rope and nock an arrow. The leaves were wet from the rain and snow, so I started to stalk him and got about 20 yards away. He looked like an old buck. He was gray and big! I think he would weigh more than the one I shot, but this guy’s rack was goofy. He had a typical left side to an 8-pointer, but his right side was a single spike about 15 inches long with a little brow tine. I wonder if he’s an old timer and is going downhill. He stepped into an opening, still focused on the dead buck and I started to draw the bow back, but I let off and decided to let him go. (Seeing as I was supposed to pick up my daughter at college and work tonight!) He started walking up to the dead buck and was posturing – his hair was raised up on his neck and back, his ears were laid back, and he was doing the stiff-legged walk. He got to within five feet of the dead deer and was bobbing his head up and down. At that point I simply stepped out from behind the tree and started walking toward him. He finally noticed me and just stared at me like he couldn’t believe a human was less than 30 yards away! Finally he spun around and took about three or four leaps and then stopped and stared at me again. I kept walking toward the dead buck and the old guy finally trotted out of sight!

I got the buck out of the woods and checked him in at the old Mass. Wildlife Headquarters building. He weighed exactly 180 lbs, fully field dressed. He’s a nice 6-pointer on an 8-point frame, minus the brow tines.