How Big Is Big Enough?

With the quality deer management philosophy so solidly ingrained in today’s hunter’s mind, the old “if it’s brown, it’s down”... 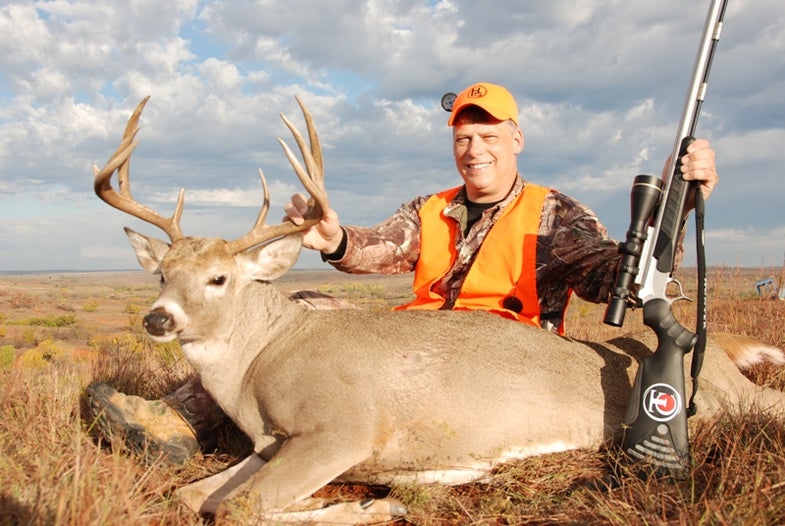 With the quality deer management philosophy so solidly ingrained in today’s hunter’s mind, the old “if it’s brown, it’s down” approach for more and more hunters is becoming a thing of the past. I make no judgment on whichever approach you choose to pursue or to what degree you make those decisions on your own land or lease. As for myself, I suppose I have shot enough deer and see enough in a season that I am more than content to let the “little ones walk” with the rightful hope that they will grow into bigger deer–the tagging of which is always a thrill to any hunter. A big set of antlers is truly one of nature’s most awe-inspiring works of art.

But here’s the question: How big is big enough? And I don’t necessarily mean the minimum accepted size for where you hunt. Some places it’s a 125- or 130-inch buck, in others it’s a series of measurements that must be judged in the field, i.e., the rack must be bigger than 14 inches wide, 12 inches tall and have a base circumference measurement of at least 28 mm. That can be a lot to determine!

I’m talking about if you have one buck tag in the area you hunt or if you are on a guided hunt where you are nearly always limited to a single buck and your hope is to take a really nice one, not just the minimum, how do you decide? That is the dilemma I’ve faced on a pair of hunts so far this season.

Hunting with Hunter’s Specialties David Forbes on his place in northern Missouri earlier this season, I had a rare broadside shot at an 8-point that would have easily scored in the 140s. The shot was a few yards beyond my self-imposed limit, which certainly gave me pause. But what honestly weighed more heavily on my mind was that it was the first morning of a four-day hunt where 150-inch and bigger deer were a very real possibility to shoot. To be clear, I never get to hunt anyplace with realistic odds like that. It’s always a possibility, but a remote one at best. I let the buck walk.

While I saw some bigger deer during the hunt including an incredible 170-inch buck (first I’ve ever seen on the hoof in my life), none of the bigger ones came close enough for a shot. A parade of smaller bucks presented shots, but that was it. I never drew an arrow on anything as big as the buck I passed on that first morning. I had had a choice, and in a way, I had chose incorrectly.

Fast forward to my hunt with Rut-N-Strut Guide Service (www.rutnstrutguideservice.com) last week and the second day in, I was faced with watching a mid to high 120s 8-point feed 56 yards in front of my blind. I was sporting a Thompson/Center Triumph Bone Collector muzzleloader so the shot was imminently doable. While I would have been fine had I chosen to shoot, I knew outfitter Todd Rogers really preferred us to shoot a 3 ½-year-old hitting at least the 130s if possible. I sighed as my conscience and H.S. cameraman Jimmy Estes agreed it was the right choice. I was becoming a wildlife watcher. Back in camp, half of the hunters would be done by the end of the day, including H.S. pro staffer Rick White, who actually filled his tag the first day of the hunt.

The next evening, same blind, virtually the same time and what I thought was the same buck came ambling along. But it wasn’t. This one was a 10-point. It had roughly the same frame as the buck of the day before, but two more points that meant extra inches. This one miiiggghttt scrape 130, but I was betting it would still come in a touch under. I went so far as to actually settle the crosshairs of the Cabela’s scope onto it’s shoulder (usually a sure inducement to pull the trigger), but in the end, simply watched it walk away.

By the second to last morning, I wasn’t seeing much until a big boy strolled into a field about 400 yards from my hillside perch with a handful of other deer. We watched him for an hour as the other deer filtered back into some draws. The heavy-racked whitetail was with three does and a smaller buck. When the rest of his group began to follow a fenceline my direction and funnel through a ravine that brought each of the other four within 80 yards, I thought I was in the money. I was wrong.

The big buck turned the other direction and disappeared into some trees far, far out of my reach. With a windy evening ahead and only one day to hunt after that, I was growing convinced that my choice to hold off once again was going to bite me.

I’m interested in knowing what some of our BBZ hunters would have done in that situation. Would you have shot the 10-point (he was a very nice buck) or held out for something bigger knowing that possibility may never happen?

Most outfitters will tell you, don’t shoot the first buck that comes along, but in light of my experiences this season, how much weight do you give that advice? Share your opinions below.