After more than 30 days of chasing whitetails across the heart of the country, I swung back home for a... 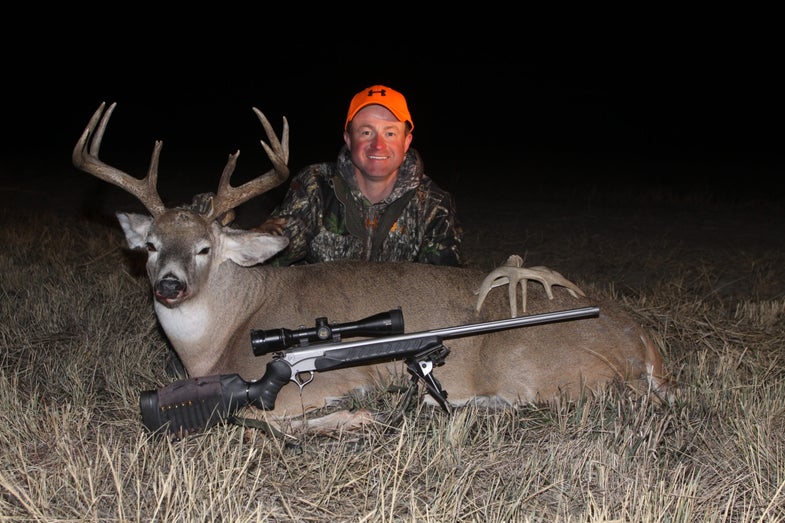 After more than 30 days of chasing whitetails across the heart of the country, I swung back home for a break before I wrap up my season with a late-season Iowa muzzleloader hunt in early January. I’m wading through stacks of E-mails and have some good bucks to share with you, but for now I wanted to share my best buck for the fall.

Take a look. He won’t score much, but he’s what I call a lumberjack buck. He’s massive in all departments despite lacking point length. I first saw this buck while scouting with my outfitter friend Pat West at Dakota Ranch Outfitters (www.dakotaranchoutfitters.com) in western South Dakota. We both judged the buck as an ancient and heavy-antlered candidate, but Pat also had seen another Boone and Crockett contender so I put this bruiser on the back burner.

After four days of chasing for the dream buck and seeing this buck on several occasions, I knew it was time to get serious or use my tag to patch a rip in my pants with its sticky surface. Of course a mature buck like this is no pushover. I had his home territory figured out, but he didn’t routinely live there. Even so, I waited it out and peeked in his haunt using high river bluffs as observation posts. Late one afternoon I finally found him in a sweet spot…or so I thought.

After spotting him, I determined the wind and the best route to attack the buck. It took me wide out onto the prairie to use the bluffs as a sniper post if possible. Of course when I finally finished the hike the buck was no where to be found. With shooting light fading I kept on the hunt and then he appeared out of nowhere. The big buck was holed up in the brush with a hot doe and ran another buck off revealing his hideout.

I moved in and set up for the shot only to have him slip back into the impenetrable cover. Shooting light was almost gone so I used my True Talker (www.hunterspec.com) grunt tube to lure him out. That combined with short bursts of rattling lured two younger bucks in and when the elder buck saw the action taking place he couldn’t stand it any longer.

A 300-yard shot turned into an 80-yard sure thing as the buck charged to my rattling. My cameraman Jason Miller captured it all for one of the most exciting episodes of Whitetail Revolution I’ve ever produced.

I couldn’t get the buck to a scale, but he was edging close to 300 pounds and had antlers with mass measurements nearing 6 inches. I estimated him at 6 ½ years of age. He was a brute and provided me some of my best hunting memories ever. I hope your hunting season was just as successful.