Show Me A Trophy Buck

There’s no doubt that you can find big bucks in New England, particularly in the far northern state of Maine,... 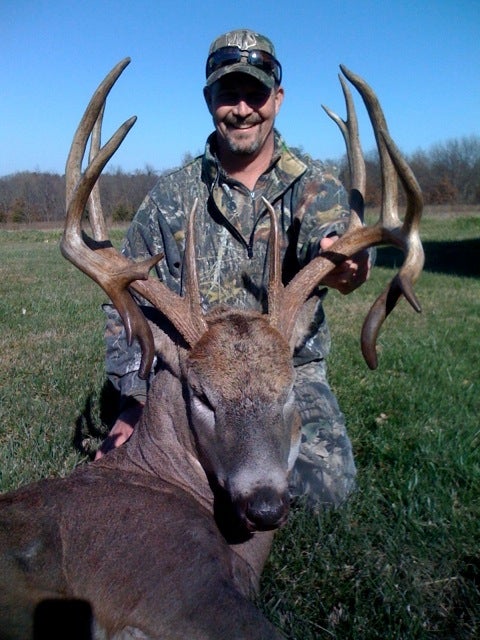 There’s no doubt that you can find big bucks in New England, particularly in the far northern state of Maine, but New England native Jeff Lewis still likes to leave the northland outpost and travel to the Midwest each fall to pursue trophy whitetails. Lewis realizes his hunting style for Maine whitetails is somewhat different than the stand-type hunting most Midwestern hunters utilize. In the north, Lewis has nearly 30 years of hunting experience that centers on tracking bucks of the big woods with only the occasional stand setup when conditions warrant.

It was stand hunting that led to this seasoned hunter’s best buck ever this past year in northwest Missouri. Lewis traveled to the Show Me State in early November to hopefully cash in on pre-rut whitetail activity. Whitetail activity had been slower than normal during the first few days of his hunt and this day was no different. Shifting winds brought him to a decision to switch stands midday and take a short lunch break. Warm temperatures were again present and likely the reason for the slower action.

Up until this evening Lewis had been hunting with his partner Don Roach. One would hunt and the other would film in hopes of capturing a great bowkill on camera. Going it solo, Lewis set up his camera to hopefully film the hunt by himself and waited for the evening action to begin.

Approximately one hour before the end of shooting light a doe and three fawns appeared and walked right under his stand. From Lewis’ experience he believed the doe was acting fidgety, almost as if she was being chased by a buck. The foursome disappeared, but less than two minutes later two more fawns showed up and right behind them was what Lewis described as an “absolute giant.”

The fawns walked right under Lewis’ stand and he knew the buck would follow the same path. Seconds later the giant was straight under his stand forcing Lewis to make a shot straight down into the oblivious buck below. Lewis believed the shot was true, but was surprised when the buck emitted the “loudest growl I have ever heard.” In fact, Lewis’ hunting partner swore he heard the noise nearly a half mile away.

The buck dashed, but fell only 75 yards away from and Lewis soon knelt beside the giant. The rack was definitely a shocker, especially the downward turning main beams which resembled drop tines. The buck’s initial green score tallies an impressive 181 1/8 gross before the 60-day drying period. Regardless of the net score this buck is a true Missouri giant and the buck’s death growl made the hunt that much more memorable.