It was mid-December and Ohio native Chris Slusher was feeling the strain of a long deer season. Slusher had been... 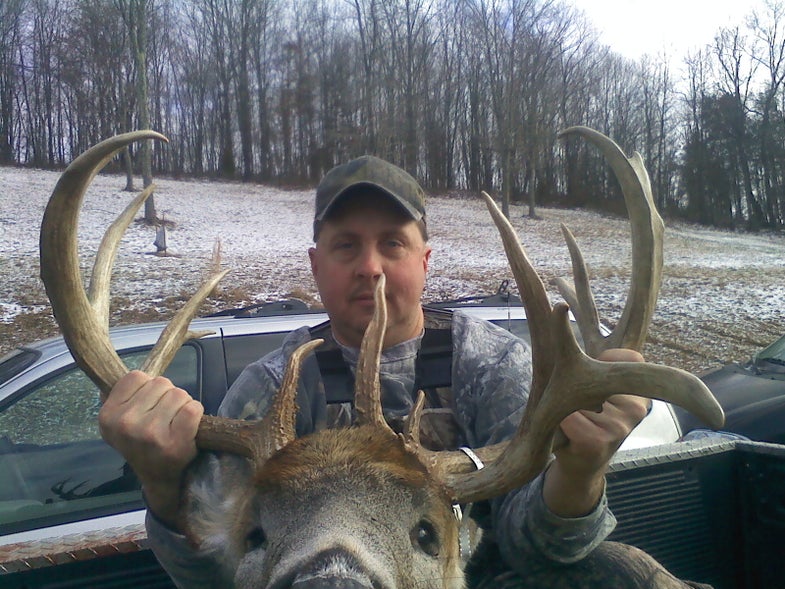 It was mid-December and Ohio native Chris Slusher was feeling the strain of a long deer season. Slusher had been hunting extremely hard and logging a lot of hours in the stand, but no shooters had showed up. However, the bowhunter had been hearing about a monster buck being spotted by several people in an area he had permission to hang a stand. It was rumored the giant buck had all the right stuff and was packing around a lot of bone!

Stories began to circulate about the buck’s intimidating headgear that had kickers, stickers, and unbelievable mass. All of these sightings gave Slusher a much needed second wind and he was more than ready to climb up a tree with his bow. The weather forecast was calling for a major cold front and Slusher knew it was the perfect time to hit the woods.

Within a few short minutes in the stand, several deer started filtering into the field to feed before the bad weather arrived. In fact, Slusher found himself surrounded by multiple slick headed does and a few basket racked bucks. Just before dark, a large-bodied deer slowly stepped out of the thick cover and began walking toward the anxious bowhunter. Slusher knew this had to be the bruiser that was causing such a buzz within the community. It was difficult not to stare at the top-heavy rack, but Slusher forced himself to focus on his shooting lanes and the upcoming shot. Finally, the breathtaking buck walked into an opening about 35 yards from Slusher’s stand and that was all he needed to get the job done. The arrow smacked the monster just behind the shoulder and Slusher was able to wrap his hands around 196-inches of bone. It’s safe to say that Slusher had a Merry Christmas and a Happy New Year after he punched that last tag of the season.