A Buck In The Freezer

Have you ever opened up your freezer to find a package of venison only to be met with chunks of... 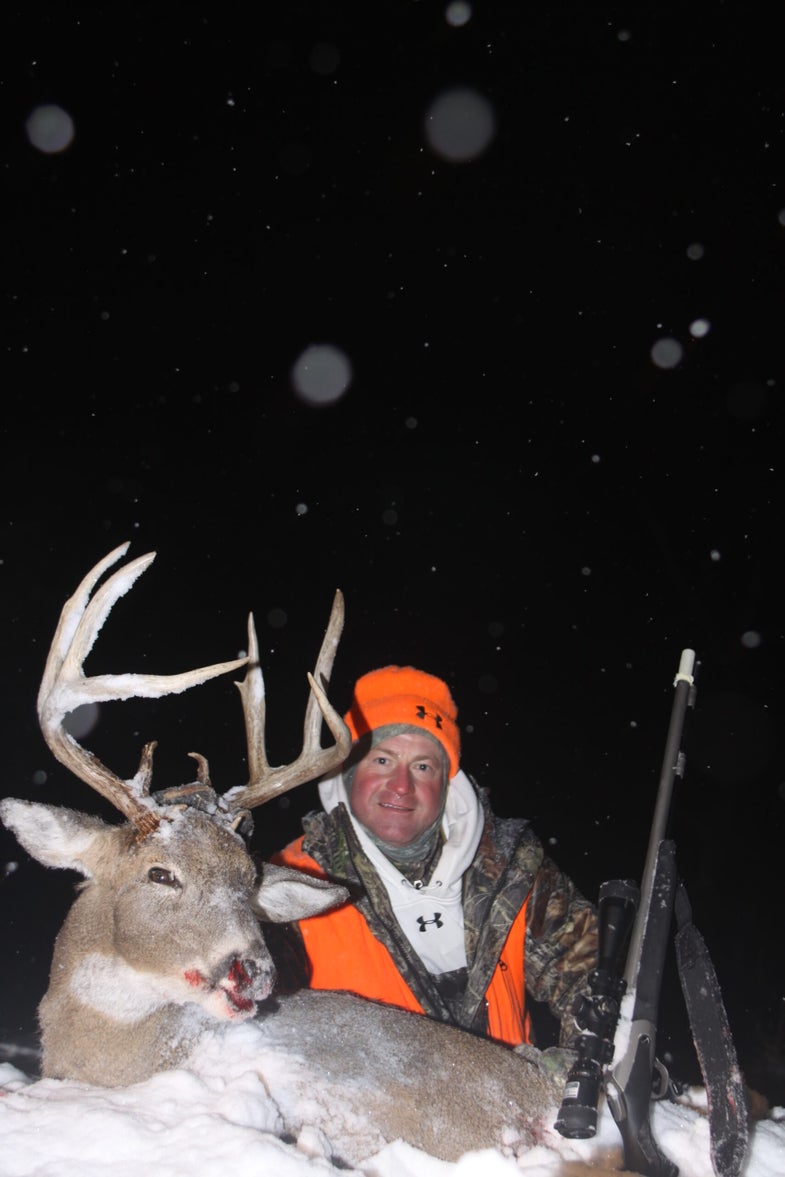 Have you ever opened up your freezer to find a package of venison only to be met with chunks of frozen ice on the sides due to someone not properly closing the lid prior to you? That’s how I felt this past week while participating in Iowa’s late-season muzzleloader hunt. If you haven’t turned the TV on in a while or read the Internet, the Midwest is in the grips of a record-setting winter. As of this past Friday, Iowa already had reached its annual snowfall and it’s only the beginning of January!

The deep snow and subzero temperatures dipping to the teens below zero and even further when wind was added, did help the hunting. Whitetails were bunched up in herds from 10 to 200 animals. Unfortunately, like many areas of the Corn Belt, wet fall conditions prevented all of the corn from being harvested and deer were traveling to these fields for quick energy. Not only were they traveling, but many stayed in large blocks of standing corn to conserve energy making the hunting equally challenging. As a final note, the stress of the severe weather was causing bucks to jettison their antlers early. Every hunter in camp saw bucks sporting bloody pedicles instead of beefy antlers, including me. Trophies were quickly blending into the herds of does.

I teamed up with Aaron Volkmar at Tails of the Hunt (www.tailsofthehunt.com). Aaron’s string of relatives in the region and his experience hunting the southern Iowa landscape proved to be beneficial in the extreme conditions. We continually moved from location to location in hopes of catching a hungry buck. For two days I camped on standing corn that was attracting whitetails like a Walmart attracts Christmas shoppers. Unfortunately the vast sea of corn allowed bucks to enter and maneuver in relative safety.

Next Aaron moved me to an old barn overlooking a creek snuggled in a series of short bluffs. The creek was harboring more than 200 whitetails including two confirmed Booners that two of Aaron’s other hunters had seen in the vicinity. My first evening at the barn was eventful in deer sightings with more than 30 noted, but no exceptional bucks. My second sit was likely to be my last since a major winter storm was brewing to the west.

Snow piled up all day, but despite the plummeting temperatures and increasing snowpack, the deer didn’t move until the last hour. On the heels of three does a tall-tined buck slipped from the creek and headed my way. Unfortunately a hill blocked most of his advance. At the last minute he appeared with another buck and they were already less than 120 yards away; perfect range for my TC Triumph (www.tcarms.com).

I let the buck keep coming and when he was well inside of 100 yards I barked to stop him for the shot. He looked at the barn and the smoke bellowed. I had a bit of a scare after the shot as I watched him running away with his tail flagging like nothing was wrong. In fact he disappeared in escape over the hill where he had appeared. I ran to check the shot location and sighed a relief seeing blood everywhere.

Aaron arrived shortly and we tracked the buck to the edge of the creek. Even with a perfect shot in the vitals the buck still traveled nearly 200 yards. I think I did this buck a favor after examining him. He had a huge abscess on his right jaw and from the looks of his body, it, along with the weather, was taking a toll on this buck’s body mass.

Iowa late-season hunts give you a slight boost in drawing a license over the archery option. If you do consider such a hunt, consider these tips. I wouldn’t have been able to withstand the brutal environment without my Heater Body Suit (www.heaterbodysuit.com). It wears like a sleeping bag, but you can easily slip out of the suit to shoot either a bow or firearm without alerting deer or other game. I’ve used the suit in temperatures from 30 degrees to subzero. Also invest in good clothing. I trusted in Under Armour (www.underarmour.com). For this hunt I relied on their Metal ColdGear base layer products. I also donned Armor Stealth Camo Cold bib and parka for my protective outer layer.

Aaron has a variety of treestands from Family Tradition Treestands (www.familytraditiontreestands.com) along with a variety of ground blinds to keep you comfortable and warm on a frigid hunt. I had hoped to add a bonus doe to my Iowa venison haul, but the weather was frightening and I opted to hit the road instead of being stranded in Iowa. If you do get too much venison in Iowa, they have a great program to distribute the extra meat through the Iowa’s Help Us Stop Hunger or HUSH program. Iowa’s Department of Natural Resources, hunters, meat lockers and the Iowa food bank have banded together to get extra venison (7,300 deer last season alone) to the needy.