Although the battle in this photo likely took place under a feeder in Texas, not a college cafeteria, there is... 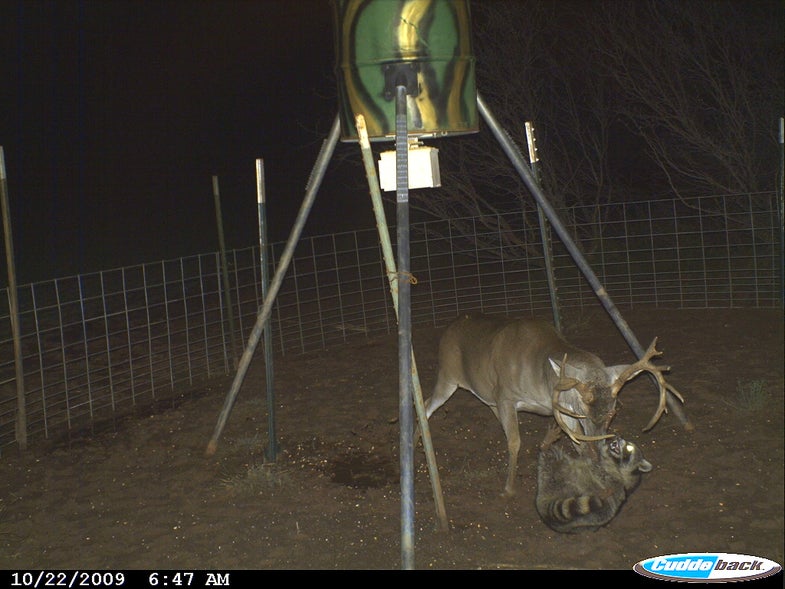 Although the battle in this photo likely took place under a feeder in Texas, not a college cafeteria, there is a real battle brewing in the Midwest right now and it is for food. Subzero temperatures, knee-deep snow and ice all have created a war zone for whitetails for a meal. Minnesota, the Dakotas, Iowa, along with parts of Illinois, Nebraska and Missouri, all have conditions that could lead to the threat of a winterkill for some whitetails. If the conditions persist for an extended time period it could mean fewer deer to hunt during the 2010 hunting season. Two elements may circumvent this from occurring. First, as I write this blog there is a large wave of warm air sweeping across the country that could thaw portions of the affected area to create easier access to food. It will certainly aid deer in burning fewer calories with higher daytime temperatures. Secondly, the wet fall has slowed the corn harvest. In December 12 percent of the crop was still in the field. North Dakota had 50 percent still standing. Deer near these fields have already stumbled across the bonanza.

Since more people than ever are managing areas for deer there is a growing concern over the winter health of the herds living on their property. This raises the debate to feed or not to feed. Many have already answered that question by starting a feeding program. Letting nature take its course is the best since hardships can ultimately make a herd stronger by sorting out the week. In addition, all regions have a carrying capacity and artificially holding a herd at a level above the land’s carrying capacity may either break you financially or set your herd up for disaster at a later date.

If you do decide to artificially feed a herd, remember to add enough ingredients. Most enthusiasts pour corn into their deer like we pour Corn Puffs into a cereal bowl. That helps, especially since corn is high in carbohydrates that produce energy and heat. In addition, veteran deer experts like Leonard Lee Rue III and Charles Alsheimer say that cutting nutritious browse with saws and dropping it to a lower level for deer may be the best answer of all for a quick fix. Of course a better answer is a well structured habitat enhancement program that includes the planting of high quality browse, food plots and mast crop enhancement. These are long term additions that will help annually for years to come.