By the time January rolls around, it’s really easy to hang up your gear and throw in the towel. Let’s... 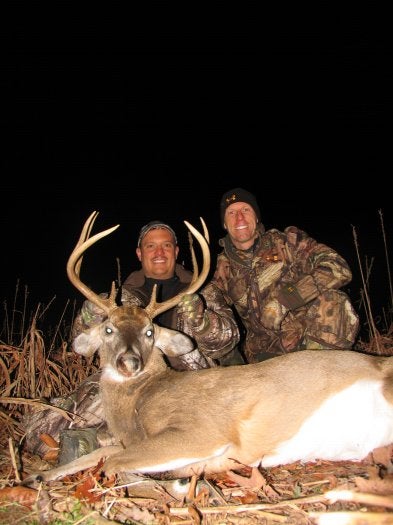 By the time January rolls around, it’s really easy to hang up your gear and throw in the towel. Let’s face it; extreme cold temperatures, late-season burnout, and ballgames on the tube are all pretty good excuses to stay at home. However, there is no better way to kick off the New Year than climbing into a treestand and taking advantage of a golden opportunity. Limited outside hunting pressure, dwindling late-season food sources, predictable patterns, and increased daytime activity are just some of the reasons why you should stick with it. In fact, some of my best bucks have been tagged long after the much anticipated rut had fizzled out and the final buzzer was about to sound off.

Some people like going to all night parties or hitting the streets of New York on New Year’s Eve to watch the ceremonial ball drop. All of that is great, but I would much rather be in the deerwoods somewhere watching a high-racked buck drop! This is exactly what happened to me on New Year’s Day during Tennessee’s late gun season a few days ago. I was hunting with my good friend and whitetail addict Spook Spann down in his neck of the woods. We were focusing on thick bedding cover and the few remaining late-season food sources. A second cold front was about to roll in that was going to cause temperatures to fall through the floor. We knew the deer would definitely be on the move under these conditions and I couldn’t wait to see what was going to ease into the winter wheat field before dark.

Within the first few minutes, a large flock of gobblers hit the field in full force and began frantically feeding. All at once, every longbeard in the field simultaneously popped their heads up and began staring back into the thick entanglement of weeds and brush at some movement. It was several slick-headed does that were starting to enter the field. All of this commotion and activity caused a tingly sensation to take over my trigger finger. Finally, the last doe hesitated and looked back over her shoulder at a larger bodied deer that was hanging tight to the cover. It was a long-tined 8-pointer that was fighting the urge to walk into the open feeding area, but its stomach won the battle in the end. I ranged the buck at 140 yards and placed my crosshairs directly on the sweet spot. One final deep breath and a gentle squeeze of the trigger ended my Tennessee deer season on a high note. As I wrapped my hands around the deer’s thick rack, I couldn’t think of any better way to jumpstart the New Year than thumping a big buck just hours after the ball had dropped in Times Square. Please share some of your late-season success stories with us on the BBZ. – Travis Faulkner