Just about anyone who has climbed into a fall treestand has imagined what it would be like to encounter a... 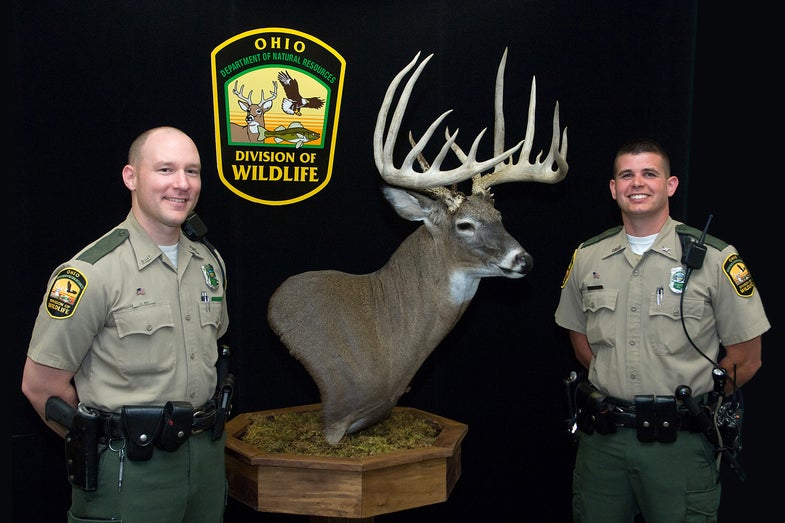 Just about anyone who has climbed into a fall treestand has imagined what it would be like to encounter a top-heavy trophy buck of a lifetime. In most cases, late night dreams and daytime fantasies are about as close as most hunters ever come to tagging a record book buck. However, Ohio bowhunter Ian Obenshain came dangerously close to harvesting what would have been the largest typical buck of the 2009 season. Unfortunately, a poacher robbed Obenshain of his chance to shoot the giant 16-point buck that he had been scouting throughout the pre-season in nearby Adams County.

For months, the hunter meticulously monitored the bruiser’s daily patterns and routines. He was even able to capture some amazing video footage and numerous trail-cam pictures of this phenomenal whitetail. Obenshain decided to share his discovery with local Game Warden and friend Chris Gilkey. He wanted to be proactive and make sure that Officer Gilkey was aware of the situation and that this special deer would be hunted the right way. By the time opening day rolled around, Obenshain had successfully patterned the monarch and felt very confident about his stand location. At the time, he had no idea that a poacher had already snuck inside the wood-line of the private property and shot the record book buck just before season. Sadly, Obenshain spent the next few months hunting for the giant buck that had mysteriously disappeared without a trace.

Consequently, the buck was never seen again until later that spring when Obenshain visited a deer and turkey expo in Columbus. His blood ran cold when he came face to face with a trophy mount on display at the show. There was no doubt the long-tined 16-pointer was the same deer he had spent countless hours watching and scouting the season before. The next day, Game Wardens Chris Gilkey and Chris Rice returned to the expo and confronted John Clay, the man who claimed to have shot the record book buck in the neighboring state of Kentucky. After a few intense hours of interrogations, Clay confessed to poaching the buck in Ohio and checking it in over the phone back in Kentucky. The phenomenal whitetail ended up being the largest typical buck taken in the world during the 2009 season.

As of right now, the deer stands as the third largest typical buck of all time in the Buckeye State. John Clay also made the record book by being fined a staggering $23,572, which is largest restitution penalty in Ohio history. He pled guilty to numerous charges, including hunting without permission and taking the deer out of season. Clay’s conviction also resulted in the permanent loss of his hunting privileges in Ohio, and he could lose the right to hunt other states as well. According to Officer Gilkey, Clay had previously been busted for poaching at least 10 different times in his life. However, Clay was severely punished this time and he was even forced to hand over the record book buck to officials. Currently, the giant is proudly hanging on the wall of the Ohio State Division of Fish & Wildlife.