Daydreaming is Great, But Don’t Set the Bar too High

It’s the start of the nail-biting season for serious whitetail nuts and I admit to nibbling on my nails in... 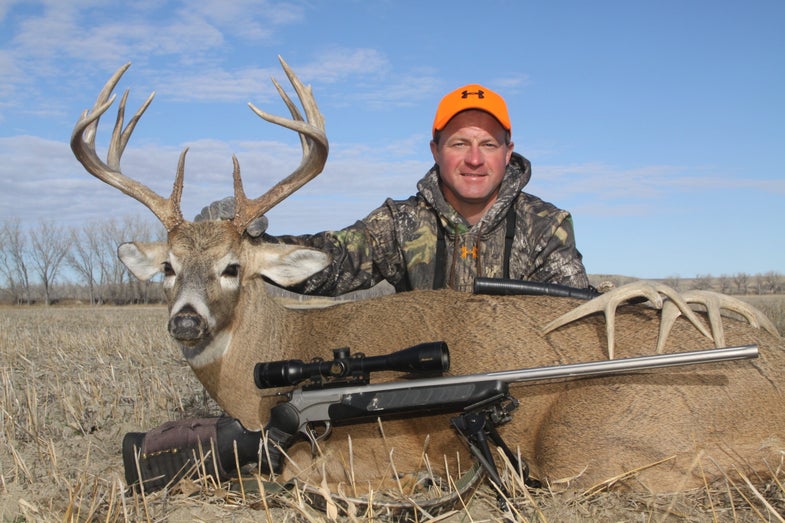 It’s the start of the nail-biting season for serious whitetail nuts and I admit to nibbling on my nails in anticipation for the upcoming hunting season still months away. While you twiddle your thumbs and let your mind wander to future hunts, don’t set the bar too high.

It used to be that whitetail hunters set their sights on the magical number of 170 points, which is the current minimum for the Boone and Crockett all-time record book for typical whitetails. Unbelievably I hear more and more hunters talking about the magical “200” mark, a goal so crazy you may want to lie down on a couch and tell your dreams to an analyst trained to detect loose screws.

Sure there are certain swaths of America, specifically the Midwest and Canadian provinces to the north that can spit out giants with regularity, but before you set a goal, research your hunting area. Hunting hard and having big dreams isn’t enough to make a trophy buck appear in front of you. You need to be hunting in the right location to eventually bump into a big buck.

To set your trophy goals with attainable objectives you first need to be honest with yourself. How many big bucks have you seen in your hunting area? How many big bucks do your close friends or relatives have on their walls? How many monster bucks do you see in the back of pickup trucks at the local gas station? In short, do they exist in your zip code and if not, are you prepared to travel to find them or settle for the backyard average.

To bring you back to mother earth consider these national statistics and data from the Boone and Crockett Club. There are more than 10 million deer hunters licensed to hunt each year, yet the sum of record book bucks shot in fair chase each year amounts to less than 1,000 according to current entries from Boone and Crockett. If you use Boone and Crockett’s scoring system of a giant, which begins at 160 points for typical and 185 points for non-typical whitetails, you get a clearer picture. The total in both the typical and non-typical category amounts to approximately 700 record bucks entering history recently. Of course not all bucks are entered, but it still shows you how insignificant the number of bruiser bucks entered are when compared to the millions of hunters in the field.

For a level-headed view of the bucks in your backyard check the record books. Two recordkeeping organizations have the goods across North America. Boone and Crockett allows entry for big game whether taken with firearm, archery or legally picked up. Pope and Young is strictly an archery recordkeeping organization with lower minimums. Entries show when and where bucks were harvested giving you the clues to set your objectives.

After you do the research set realistic goals or plan to visit a big buck Mecca like the Midwest or Canada. There’s nothing wrong with shooting garden variety bucks, but there is something wrong with passing up opportunities at these bucks when monster bucks might only be a figment of your imagination in your honey hole.