In recent years, there have been a lot of discussions and heated debates among hunters about how trophy bucks are... 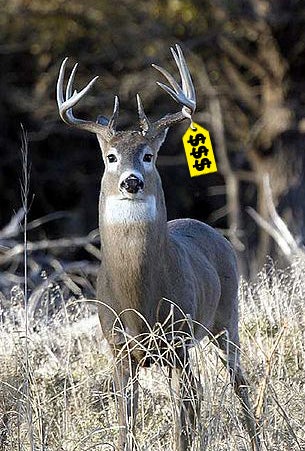 In recent years, there have been a lot of discussions and heated debates among hunters about how trophy bucks are currently being entered into the record books. Some argue that many of today’s record book bucks are simply being bought by wealthy hunters on expensive and exclusive hunts. On this side of the debate, hunters feel that whitetails are practically being raised like cattle on private land and are only shot by individuals with hefty bank accounts.

With some of these private management programs, it is said that antlered deer are basically pumped full of protein and fed throughout the year like a farmer’s prize hog at the state fair. When hunting season rolls around, these massive-racked bucks are bought and paid for by the highest bidder.

There are also complaints about trophy-class whitetails being harvested by people who book costly outfitted or guided hunts across the nation. Many feel that guided hunts are responsible for taking the actual “hunting” out of hunting. In other words, a person is paying someone else to do all of the leg work for them. It’s the guide or outfitter who does the scouting, hangs all of the treestands, and makes the decisions that lead to the shot.

On that note, a lot of hunters strongly feel that organizations like the Boone & Crockett Club should start entering record book bucks into different categories. For example, they believe whitetails that are harvested from private ranches or guided hunts need to be grouped separately from public-land entries.

On the other side of the argument, many hunters believe that professional outfitters, guides, and hunting clubs have been instrumental in promoting the sport of hunting. Essentially, they provide a valuable service for hunters who have dreamed about chasing monster whitetails in far away states. Outfitters also give non-resident hunters access to prime hunting locations, helpful advice, and effective strategies that can increase their chances of punching a tag.

It’s also important to note that out-of-town hunters generate a much needed boost for local economies, which can help the entire community. From a hunting standpoint, non-resident license and tag sales can create additional funding for state wildlife agencies and programs. States have more money to spend on wildlife studies, habitat improvement projects, conservation programs and law enforcement.

Another valid point is that the Boone & Crockett Club only records free-ranging animals that have been taken in a fair chase environment. In reality, the overwhelming majority of all B & C entries are from self-guided hunters each year. Furthermore, there are dozens of public-land whitetail buck entries consistently recorded each and every season.

For example, Cory D. Williams dropped a monster 177 – 5/8 B & C bruiser during the 2009 season from a public-land draw hunt in Minnesota. In fact, this amazing 14-point archery buck was actually one of two B & C record book bucks entered from the Camp Ripley Military Base in Little Falls, Minnesota last season. However, some hunters still argue there should be separate categories for these record book entries. With that being said, I would like to hear some of your opinions on this highly sensitive subject.