Recently, we ran a story showcasing a picture of a phenomenal buck that was taken by Neil Morin in the... 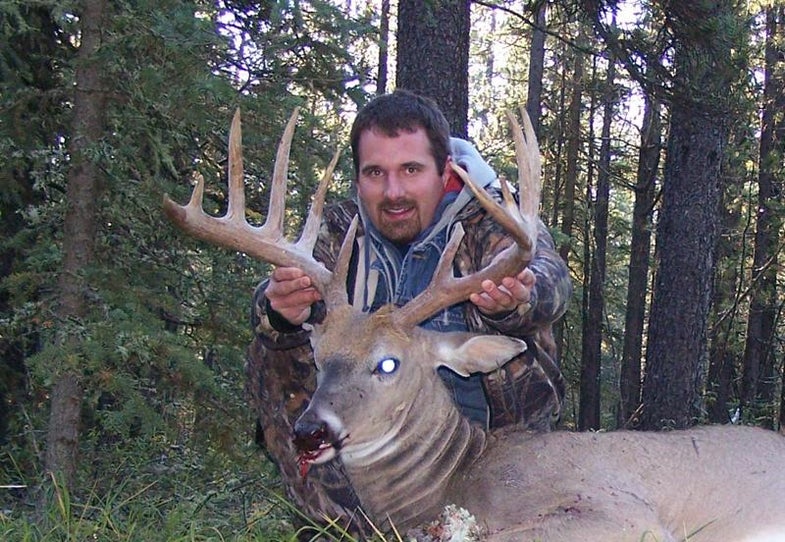 Recently, we ran a story showcasing a picture of a phenomenal buck that was taken by Neil Morin in the big buck country of Canada many years ago. The point of this article was to simply get everyone on the BBZ fired-up and ready for the season.

For most of us, the mere image of a bruiser that appears to have a rocking-chair attached to its head is enough to trigger a severe case of whitetail fever. Consequently, many of you agreed that seeing this super-sized rack made you want to climb into your treestand right then and there. This piece was also able to pump-up Neil Morin and you’ll never believe what happened to this Canadian hunter just a few weeks after the story appeared on the BBZ.

During Morin’s daily commute to work, he began noticing a lot of deer activity near several key locations along his route. Immediately, he decided to scout these areas by hanging a few trail-cameras above some worn trails that cut across the heavily wooded terrain of the Alberta foothills. Within a few days, Morin was able to capture numerous photos of deer using a travel route that connected their bedding area to a current food source.

There was definitely a lot of fresh sign in the area, but the trail-cam pictures are what made him want to stick with the location throughout the entire season if necessary. According to the photos, a giant buck with heavy bases and tall-tines had routinely been working the area, which gave Morin the confidence he needed to stay in the woods.

After reviewing the pictures and establishing a pattern, Morin decided to setup a ground blind within bow range of the buck’s primary travel corridor. Next, he constructed a mock scrape inside of a cleared shooting lane and strategically positioned a few white blocks out from his blind to clearly mark the yardage.

Unfortunately, Morin wasn’t able to connect with the backwoods bruiser during the early archery season. However, all of his hard work did pay off during the opening weeks of the Alberta gun season. On the third day of his hunt, the cautious wide-racked buck finally showed up along the trail and paused just inside of the cleared shooting lane to check out Morin’s scrape. Without hesitation, the hunter squeezed the trigger and ended his 2010 season in Canada.

This unbelievable whitetail was packing a rack that was over 24-inches wide and carrying 12 massive points. It is estimated that the buck will score just under 180 and will make a perfect addition to Morin’s trophy wall. Congratulations Neil on another amazing Canadian whitetail and thanks for sharing your story with Outdoor Life’s Big Buck Zone.