Are Bucks Smarter Than Does?

Many hunters strongly believe that mature bucks with intimidating headgear represent a different breed of whitetail. Over the years, it... 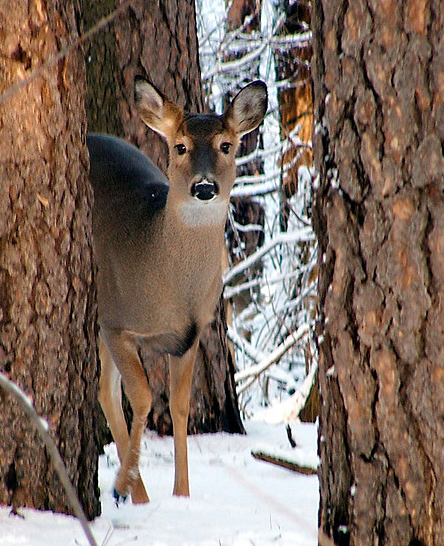 Many hunters strongly believe that mature bucks with intimidating headgear represent a different breed of whitetail. Over the years, it has even been said that these deer have somehow acquired or developed a sixth sense.

These special bucks with extra sensory capabilities are rumored to have mythical powers that enable them to move through the woods like ghosts and disappear into thin air. Now, I don’t know about all of that hype, but it can be really tough to connect with any antlered deer that has survived a few seasons.

A public-land bruiser that has learned the ropes can definitely seem like it has super powers sometimes. With that being said, does this mean that an older buck is more intelligent or a better survivor than a mature doe in the same environment?

Consequently, some hunters are convinced that bucks are far more intelligent than their female counterparts. On this side of the debate, it is argued that older public-land bucks possess higher-level thinking skills. For example, many hunters feel that mature bucks can pattern our daily hunting habit and routines.

It is also said this special breed of whitetail can logically choose overlooked safe havens and hidden travel routes that allow them to stay just outside of our radar. Lastly, uneven doe to buck vehicle collision ratios in some areas are often thrown up as additional proof that bucks are actually smarter than does.

However, other hunters feel there really is no rock solid or scientific proof to support these theories. In fact, they claim that both does and bucks living inside of highly-pressured hunting areas are tough to hunt period. For good reason, all whitetails inhabiting extreme hunting environments have simply learned how to survive. A few years consisting of close encounters and multiple hunter mistakes have taught these deer exactly what they need to do to stay out of our crosshairs.

As far as vehicle collisions go, hunters on this side of the debate believe that lopsided female to male ratios are responsible for more does being hit along roadsides. On that note, I am interested to hear what all of my friends on the BBZ have to say about the subject. Be sure to share your opinions by posting us a comment.