This photo brings back a lot of memories. Here’s one proud hunter. His name is Will Hetherington from the Twin... 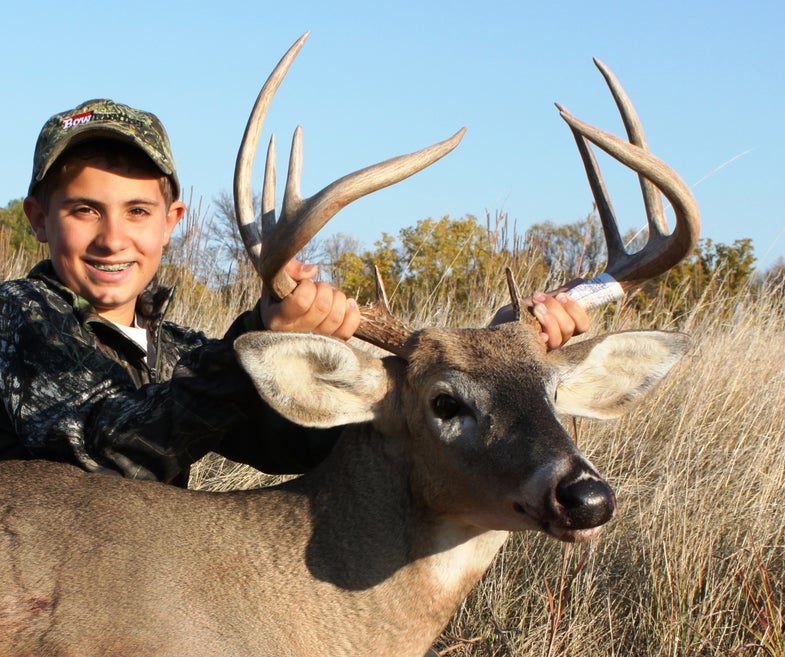 This photo brings back a lot of memories. Here’s one proud hunter. His name is Will Hetherington from the Twin Cities region of Minnesota. His father is Lee Hetherington, vice president consumer publishing for Grand View Media. I shared hunting camp with the duo and their father Earl this past week while hunting tribal lands in South Dakota. Lee took 12-year-old Will out of school for the deer hunt. A deal was cut that if Will kept up his grades, he could get out of school.

Will got close several times to whitetails, but it wasn’t until they watched a small hayfield at sunset that his lucked changed. The buck slipped out and fed toward Will and when it finally reached 127 yards he lit the fire on his muzzleloader. “He’s down, dad! I just shot my first buck, and we watched him fall,” exclaimed will as told by Lee.

Lee added, “We hugged, did high-fives and gave thanks for the blessing of Will’s first buck.” A few minutes later Will was ready to pose for pictures with his first deer, a dandy buck that scored nearly 130.

My first deer memories were just as exciting and I remember it as clearly today as if it happened yesterday. I was perched in the crotch of an old cottonwood tree in a ditch that ran down the middle of a standing cornfield. Deer were rutting everywhere around me and occasionally shooting out of the corn just out of range of my old Bear Whitetail compound bow.

Finally a one-antlered buck cruised out of the standing corn searching for the love of his life. The buck walked blindly by my tree and I launched a heavy aluminum arrow tipped with a Savora broadhead. The hit was a bit far back, but the buck stopped again before entering the corn and I hit him with a second fatal shot. A short time later I was field-dressing the buck with a flashlight clenched in my mouth and reading directions from an Outdoor Life book on hunting whitetail deer. To this day the pages still have my bloody fingerprints on the pages.