Another Pope and Young Buck Down

Well, it’s mid-November and things are really starting to crank-up in the deer woods. Over the past few weeks, I’ve... 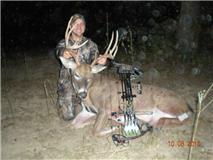 Well, it’s mid-November and things are really starting to crank-up in the deer woods. Over the past few weeks, I’ve been spending every possible second in the woods either scouting or hunting. With that being said, just seeing all the new buck sign is making it very difficult for me to sleep at night or even focus at work.

In addition, hearing about other hunters knocking down bruisers every other day is not helping matters much either. For example, I recently received an email from a Big Buck Zone viewer named Jeremie Ott about his successful archery hunt in southern Illinois with Jarod Jackson of Illinois Ohio Valley Trophy Hunts.

At one time or another, just about every monster rack addict has dreamed about hunting the legendary state of Illinois. After years of thinking about it, Jeremie Ott from Louisiana finally made the long drive north to hunt the top-heavy bucks that had been keeping him up late at night. On his third evening in the stand, a high-racked buck emerged from the cover and slowly began walking toward the excited hunter.

However, Ott was quickly running out of good shooting light and doubt began to fill-up his mind. By the time the buck stepped into bow range, Ott could barely pick out the pins on his sight. With light fading fast, Ott steadied his top pin on the buck’s sweet spot and let an arrow fly.

A loud SWAT broke the evening silence and the large-bodied whitetail dropped straight down out of sight. The arrow had busted through the buck’s front shoulders, which penned him directly to the ground. Without hesitation, Ott followed up with a second kill shot that ended his lifelong quest in Illinois. This was Ott’s very first Pope &Young trophy buck and it’s safe to say that he actually enjoyed the long drive back to his home state of Louisiana. All of us on the Big Buck Zone would like to congratulate Ott on a job well done.

On that note, we would love to hear about any of your success stories or close encounters that have occurred this season. Be sure to post a comment or shoot me an email about what is going on in your neck of the woods – ttfaulkner@msn.com. Good luck and Good hunting!