Great Day In The Woods

Iowa, Kansas, Wisconsin, Ohio, Michigan–we here at the Big Buck Zone have brought you dozens of stories about hunters and... 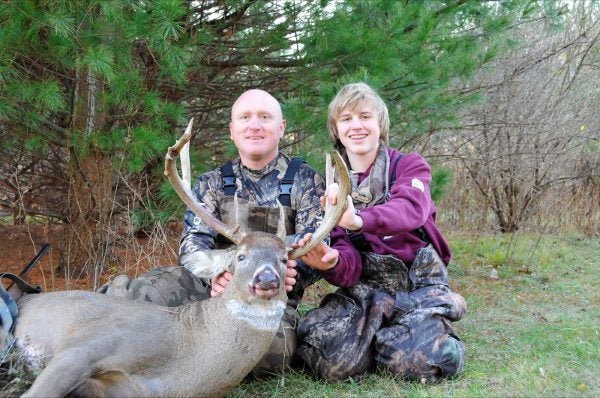 Iowa, Kansas, Wisconsin, Ohio, Michigan–we here at the Big Buck Zone have brought you dozens of stories about hunters and their monster bucks taken in those states, but sportsmen in the Northeast are cracking some nice bucks, too. One of the best-kept secrets in the world of top-end bucks is the state of Connecticut. Witness this bruiser shot by Doug Heppleston while hunting with his 13-year-old son, Matt.

On Saturday, November 20, Doug and Matt set out for a morning hunt in northwestern Connecticut. They hunted the property for the previous week on the last youth hunter day and on Wednesday and Thursday of the opening week of the private land rifle season. Because they hadn’t seen a deer on their earlier trips to the land, they were feeling a bit discouraged. They decided to try a different location on property they have permission to hunt. Around 9:30 AM Matt caught some movement in the brush about 150-175 yards from where they were.They definitely knew it was a deer but it was gone before they had a shot opportunity. About 10 minutes later, the deer reappeared in the same spot walking with it’s nose down through the thick brush. Matt, a recent basic hunter education graduate realized the shot was outside of his effective range and made the ethical decision to defer the shot to his dad. At the crack of the rifle, the deer dropped in it’s tracks! When they got to the deer they found an old, large gnarly-racked 8-pointer. A great father-and-son memory to cherish forever!