Ryan Howe is not unlike many hunters in their 20s. He embraces whitetail hunting and engages in it with everything... 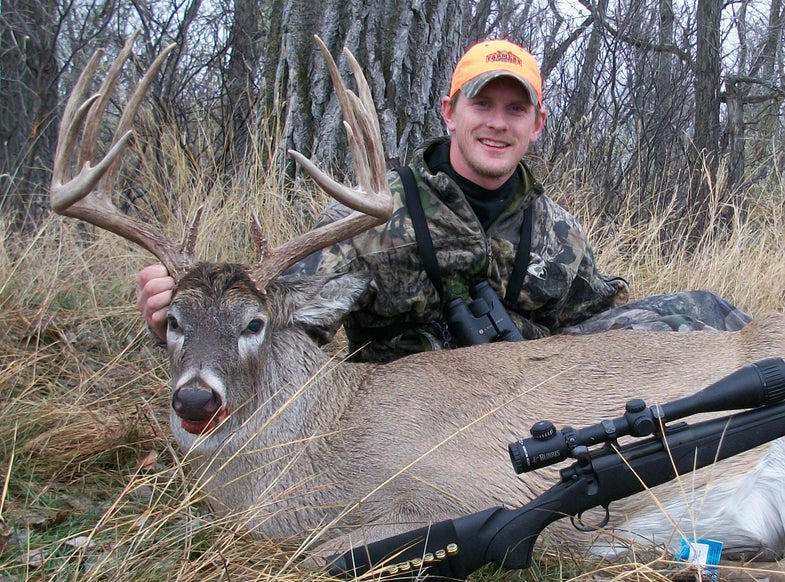 Ryan Howe is not unlike many hunters in their 20s. He embraces whitetail hunting and engages in it with everything from stick, and string to firearms. In fact, he was batting a thousand this season.

He started out with a 145-point 4×4 archery whitetail from a unit west of the Missouri River. He arrowed another 141-inch brute on his family farm in eastern South Dakota. For most that would be a great season, but Ryan wasn’t done yet. He traveled back west for firearm season and hunted hard for a muley buck worthy of mounting. The hunt ended with a grin after Ryan tagged a 171-inch, heavy-antlered buck sporting kicker points.

For most that would be several seasons worth of memories alone, but for Howe the prize was still ahead. With an open whitetail tag still in his pocket Ryan continued to hunt and on November 17, 2010, he spied a brute of a whitetail chasing a doe along with four other love-hungry bucks. Unfortunately the buck was across the fence on neighboring property so Howe just sat and watched hoping the large-framed buck would cross onto property he had permission to hunt.

The sky was spitting light rain, but even that and the 31-degree temperature couldn’t stop Howe from waiting out the big buck busy defending his hot doe. Finally the doe made a break for it and crossed onto the property Howe had permission to hunt. In tow was the monster buck. When the buck finally crossed the property line Howe steadied his Remington 700, .300 WSM on Harris bipods and at 310 yards depressed the trigger. The big buck dropped instantly.

Although Howe had tagged some big bucks this season and in past, none compared to the giant before him. The big buck sported five scoreable points per side and the start of a sixth point. After standing in awe and grabbing some quick field pictures, Howe and friends found a tape and started scoring. Their unofficial green score put the buck at more than 186 points.

This buck will rank high in South Dakota’s records, but more importantly, it will rank the highest for Howe’s hunting memories. Oh yes, Howe wasn’t done hunting yet. He finished his season with a firearm whitetail in eastern South Dakota that scored 146 points as a 5×4. What a season and congratulations!