Great Hunt For A Buck

Some of you veterans may remember Ralph Stuart’s byline from Outdoor Life many years ago. Nowadays, Stuart is the editor... 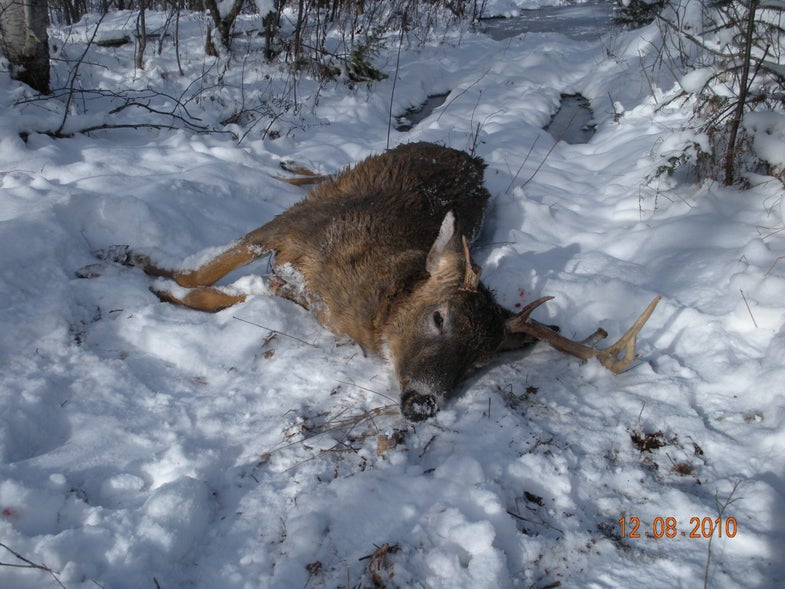 Some of you veterans may remember Ralph Stuart’s byline from Outdoor Life many years ago. Nowadays, Stuart is the editor of Shooting Sportsman magazine. Although the magazine is largely about fine shotguns and winged game, Ralph dearly loves hunting whitetails and he’s damn good at it. Here’s his muzzleloading-season tale from yesterday.

Well, it was a long season, but I finally filled my tag yesterday with a good buck. Helluva story, too. Wednesday was the first day we’d had snow in our area all fall, and around 1 p.m. I was following this buck’s track, when he jumped out of his bed and came running down a logging road toward me. (We couldn’t see each other because there was a thick spruce tree between us.) When we spotted each other at 15 yards, he spun and started heading back uphill, and I got one shot into him as he disappeared behind the spruce.

I then blood-tracked him for a half-mile before he disappeared in some thick swale grass where I couldn’t follow (the water in the swamp was over my knee-high rubber boots). The next morning I was back at the swamp at first light packing my waders. I changed into the waders, waited until there was enough light to shoot, and slowly proceeded into the tall grass. I had gone only 30 yards when I saw him bedded with his head up about 20 yards in front of me. He labored to get up, turned to run, and I dropped him. (Turns out I had hit him in the left rear leg the day before.)

I’m calling him a six-point, and he probably would have been at least a nine if he hadn’t broken off his right antler earlier in the year. The G2 on his left antler is busted off and worn down also. I haven’t weighed him yet, but I’m guessing he’ll go about 135. He’s not the 200-pounder I’ve been looking for, but it was a great hunt and a great way to end the season.

The drag was three-quarters of a mile uphill….