Just a few years ago almost to the day, I eagerly awaited the first tracking snow of the season. I’d... 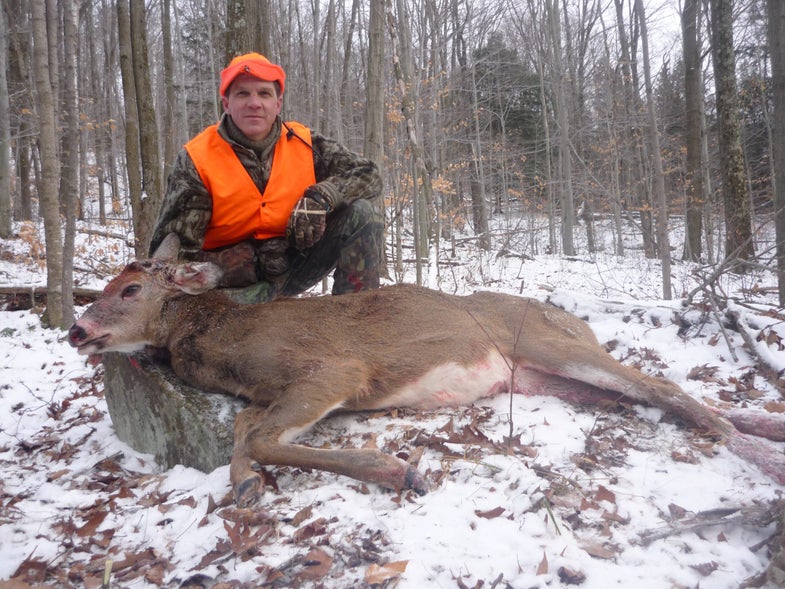 Just a few years ago almost to the day, I eagerly awaited the first tracking snow of the season. I’d seen several great bucks in my hunting area, but all by the light of a full moon. When a few inches of snow finally fell, I took a few days off from work to muzzleloader hunt. I’d barely gotten through the front door that first morning when I spotted something odd lying in the snow. Excitement turned to misery in an instant. There lay the perfectly matched set of a great 8-pointer. I was bumming hard. Just got this e-mail from hunting buddy, George Hamilton. He’s bumming a bit, too.

A whole bunch of us went out today and froze our butts off! In the morning, five guys took posts and I pushed toward them. I moved three deer and they went in the general direction of the standers, but went by in an opening in the gauntlet and no one saw them. After the morning hunt we lost a couple of guys, so the afternoon hunt was down to four of us.

We hunted another area and two guys posted while my friend, Harvey, and I worked toward them from a few miles away. I got on a track that looked pretty big. The deer was all by itself and was dragging its hooves when it walked. I was hoping it was a nice buck. The deer was heading right for the standers at a walk. Wasn’t spooked and was just making it’s way along the ridge top. A few hundred yards from the standers I came into a pile of sign where the deer had been feeding on acorns. Not long after that I spotted the deer at about 50 yards in front of me. The wind was in my face, the deer was feeding and the body looked big, however a big oak tree was hiding the head from me. I just waited with the scope on the deer and when it moved I saw that there were no antlers. Because I had a doe tag and because the body looked big I shot. The end result, unfortunately, is that the deer is a buck and he had already shed his rack! He weighed about 150 lbs. dressed and looks like an old timer: roman nose, gray face, and his teeth are really worn down. You should see the size of the bases at the pedicles. I hate to think what his rack looked like! One of the guys that was with us is a taxidermist and he thinks he was a 6 1/2 year old. I guess that’s the chance you take hunting in the cold of December!