When country music star Craig Morgan jumps on his tour bus during the fall for the year, you better believe... 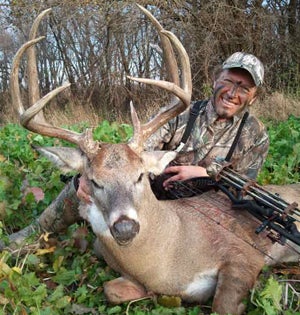 When country music star Craig Morgan jumps on his tour bus during the fall for the year, you better believe he is packing a whole lot more than finely tuned guitars, microphones, and high-tech sound equipment. Truth be told, you’re more likely to find stacks of treestands, ground-blinds, smoke-poles, and lightning fast bows aboard the “BBD Express.”

Fans have even reported seeing their favorite entertainer standing on the roof of his bus slinging arrows right before a show. Now, that’s pure country and that is essentially what this old boy with blue-collar roots is all about.

Without hesitation, he setup a stand that overlooked some heavily worn trails and a fresh scrape-line. Undoubtedly, this was the perfect place to intercept a lovesick monster with raging hormones and a bad attitude.

As you can imagine, Craig couldn’t fight the urge to clash some bone together, especially after seeing all of the rut-crazed action from the day before. Consequently, within five minutes of his first rattling sequence, a long-tined Kansas buck showed up in the back of the field and began working a scrape. Just a few grunts from his Tru-Talker call coaxed the deer right into bow range and that was basically all he needed to close the deal. After the shot, Morgan followed a bright red blood trail right up to the largest 8-pointer he had ever encountered.

In fact, this amazing whitetail will score over 160 and it’s going to make a great addition to Craig’s already impressive trophy room. As of right now, this hardcore hunter from the Volunteer State is absolutely having the deer season of his life!

It’s actually hard to believe just how many bruisers he has knocked into the dirt this year alone. On a side note, you’ll be able to check out all of these action-packed hunts on his show – “Craig Morgan’s All Access Outdoors” very soon. Way to go Craig and be sure to keep things rocking on stage and in the woods brother!