Without question, mature whitetail bucks with heavy headgear have always fascinated me and captured my imagination. It’s amazing how much... 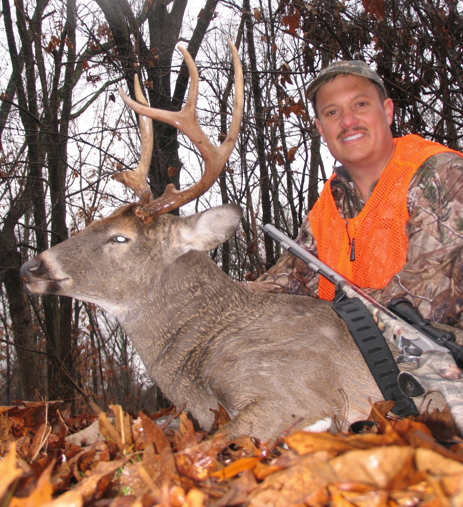 Without question, mature whitetail bucks with heavy headgear have always fascinated me and captured my imagination. It’s amazing how much one can learn about these phenomenal animals each and every time you hit the woods. Over the years, I’ve noticed that bucks, just like people, are different in nature and personality.

For example, it seems that some individuals both in society and the woods just like to fight. You know the kind I am talking about. It’s the ones who will throw down at the drop of a hat and are always ready rumble regardless of the circumstances or the situation.

As luck would have it, I happened to run into one of these individuals just last week in southern Illinois during the late muzzle-loading season. On this particular hunt, the weather was extremely cold and dreary, but there were obvious signs that the secondary rut was about to kick into full-swing. My son and brother-in-law saw at least two bucks chasing does and I witnessed a couple of intense fights in my stand just before daylight during our first morning hunt. We also spotted numerous bucks chasing does along the road when driving to and from the woods. After seeing all of this action, I decided to crank things up and break out my calls.

Consequently, a combination of deep-throated grunts and young estrous doe bleats seemed to be getting the bucks’ attention. I called in several decent racked deer, but the shooters seemed to be already locked down with either a yearling doe that was just hitting their first estrous cycle or a mature doe that had not been successfully bred during the primary rut. By the last day of my hunt, the sky opened up and unleashed a downpour of freezing rain and sleet. The action was slow up until mid-morning when the deer finally started moving. I decided to try one more buck and doe calling sequence, which was just what the doctor ordered.

Finally, a thick-necked buck with a heavy rack and bladed G2’s popped out of the dense cover and angrily started marching down a wooded draw just below my stand. The whitetail’s extra-long tines and overall antler mass immediately brought my TC Endeavor to my shoulder. With one good shooting lane left, I stopped the buck right before he was about to disappear into the brush and squeezed the trigger. The 50 caliber sabot knocked the battle-worn bruiser into the dirt and my hunt was over!

However, I was floored when walking up on this late-season brawler, because he was busted up and carrying a lot of scars. In fact, both of his brows were missing and the G3 point on the opposite side was badly damaged. The poor old buck had also lost the end of its main beam and deep antler cuts from previous matches could be seen on every side of his battered body. Despite all of his wounds, he had aggressively answered my call and was looking to go another round. Personally, I don’t know if this buck with a gnarly rack had ever won a fight, but he definitely never backed down from one!

On a side note, my good friend Jarod Jackson of Illinois Ohio Valley Trophy Hunts, said this particular buck had built a reputation of bullying and challenging just about every antlered deer that he had encountered in the past. Needless to say, Jackson was glad the old brawler’s reign was finally over and I was honored for him to ride in the back of my truck.