As a hunter, one of my proudest moments in the woods was watching my son squeeze the trigger on his... 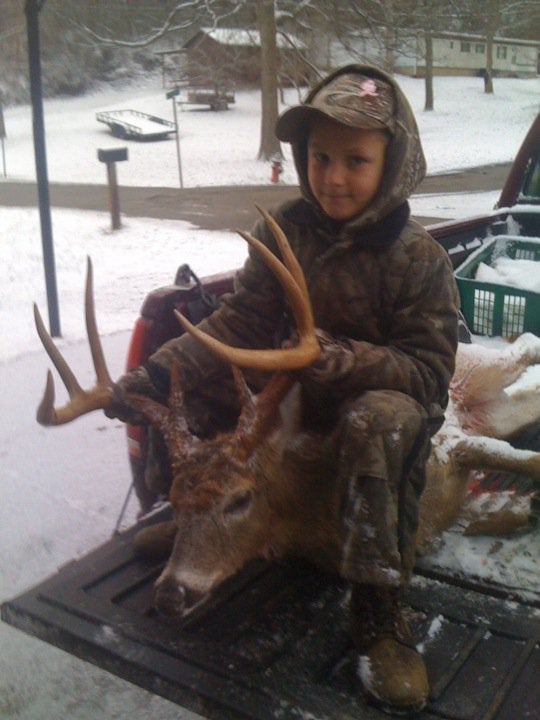 As a hunter, one of my proudest moments in the woods was watching my son squeeze the trigger on his very first buck several years ago. He was sitting on my lap inside of a makeshift ground blind and I could actually feel his heavy breaths and rapid heartbeat just before the moment of truth arrived. Words can’t explain how that hunt made me feel inside, but it’s probably a safe bet that many of you know from your own personal experiences exactly what I am talking about.

On that note, a BBZ fan named Chad Manning recently sent me an email about a very special late-season hunt that he experienced with his son just last weekend.

His story brought back memories of the hunt I shared with my son James when he was only eight-years old. Like most of us, Manning was unable to describe the sea of emotion that overcame him that day in the blind with his son Mason. It all started with a trail-cam picture of a long-tined whitetail that showed up near one of their favorite mountain hunting spots a few weeks ago. From that point on, the picture of this dark-racked buck was all that young Mason could think of or talk about. Luckily, the Kentucky late muzzleloading season was approaching and Mason still had a buck tag left.

The opening weekend forecast was calling for bitter cold temperatures and snow, but a little winter weather was definitely not going to keep this father and son team out of the woods. Unfortunately, the action was pretty slow during the first few hours in the blind and Mason was about ready to call it quits. However, his father told him they needed to sit tight for at least a half hour longer.

This was good advice, because the deer Mason had been waiting on walked into view a few minutes later. The young hunter could really feel the pressure building as the buck stood motionless inside of a thick entanglement of underbrush and briars for what seemed to be an eternity. Mason’s father quietly whispered some last second advice to calm his nerves before the shot.

Finally, the buck eased out of the dense cover and stepped into a cleared shooting lane. Mason took one last deep breath and desperately tried to control his trembling hands and arms. With a solid shooting rest, he placed the crosshairs directly behind the whitetail’s massive shoulder and wrapped his finger around the trigger. The loud roar of the black powder rifle echoed across the deep mountain basin and a heavy cloud of smoke filled the cold morning air. It was a solid hit, but Mason would still have to wait a few hours before recovering one of the biggest bucks he had ever encountered.

In fact, this heavy-horned whitetail was actually Mason’s very first buck and he still hasn’t come down from the initial adrenaline rush. By the way, his father is still on top of the world right now too and you can’t really blame him for being one proud pappa. Congratulations Mason on a phenomenal late-season buck and good luck next fall!