She’s Not Shy About Hunting Whitetails

To say that Montanan Jason Coulter loves hunting barely describes his devotion to the sport. Coulter has hunted and guided... 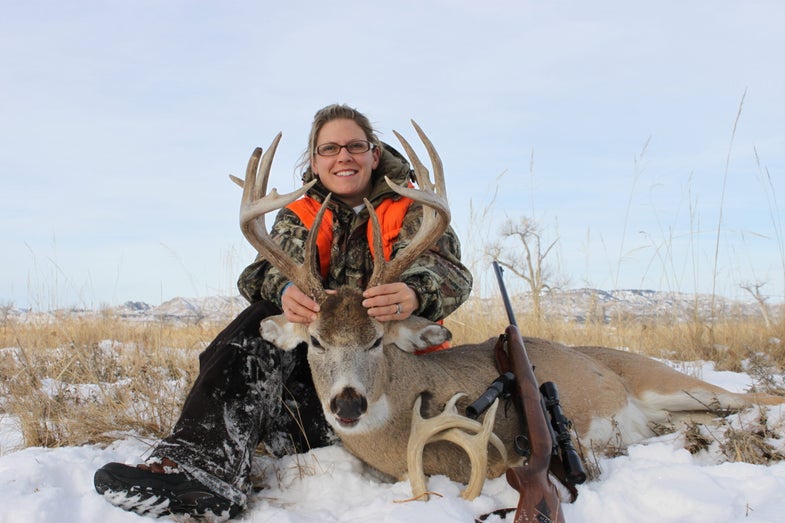 To say that Montanan Jason Coulter loves hunting barely describes his devotion to the sport. Coulter has hunted and guided in eastern Montana his entire life, plus recently returned from the Yukon where he tagged a brute of a mountain caribou.

It’s hard to hide that type of enthusiasm and even his two young children are beginning to catch the bug. In addition, Coulter’s wife Shye has entered the world of hunting and this past weekend tagged her first whitetail.

This weekend was the closing of Montana’s general firearm season and Coulter targeted the Powder River to try and rattle in a rutting whitetail for his bride. After spotting two possible candidates the duo waited for the deer to retire into the back brush of a river oxbow and then proceeded to sneak in to rattle one of the bucks in hiding.

On the very first setup Coulter rattled in an exuberant buck, but whispered for Shye to pass since he knew better bucks were nearby. It was hard to pass on the nice buck standing less than 30 yards away. From the same location Coulter rattled again and this time an impressive mule deer responded, but Coulter again whispered for Shye to pass. On the third attempt from the same spot a pair of young bucks ran into the horns, but Coulter felt one more attempt was in order.

On the last try one of the bigger bucks couldn’t ignore the clatter any longer. The heavier-antlered of the two bucks ran to the sound. Sizing up the buck as a shooter, Coulter gave the green light to Shye and minutes later the pair walked up on her first whitetail buck.

Her first whitetail was indeed a true trophy. It sported a 5×6 rack with towering brows and heavy beams that had a gross score of 145 points. Needless to say both husband and wife were ecstatic with the results. I’ve got an idea. Instead of date night why not try hunting? Sounds like a bonding experience to me.