Something Rotten In The Deer Woods

I interrupt our cavalcade of monster bucks for this special report: This deer season has sucked! Okay, I won’t take... 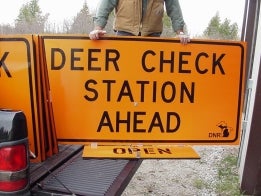 I interrupt our cavalcade of monster bucks for this special report: This deer season has sucked! Okay, I won’t take credit for that rather frank description of the hunt thus far, but I do agree with my friend, George Hamilton’s assessment of things–at least in some areas of the Northeast.

Hamilton and I do a great deal of hunting in the Berkshires of western Mass. and feel certain that there’s something bad–very bad–going on in our deer woods. Preliminary reports from area check stations are down, but more startling is that deer sightings–at least from my chats with other hunters–are not just down but rare. For example, one group of eight hunters in the South County region of the state moved just 4 deer in two days of dawn to dusk deer drives. That’s miserable action and only compares to one other thing–last year.

The culprits? There are likely two: coyotes and mast. There’s little doubt that a coyote population boom is taking place. It’s nothing to hear 3 or 4 packs of dogs howling most any evening at sundown. While they don’t likely take down too many adult deer, their impact on fawn recruitment is, to me, clear. This summer I watched a pair of does with two fawns each feeding in my food plots. Then I’d see them with one fawn each and finally by themselves.

A super mast crop and lack of snow thus far has certainly impacted hunter success as well. Mast tends to spread out the herd making deer difficult to pattern and without some snow on the ground, tracking is impossible.

So what’s the deal? I don’t know for certain and it will be a few months before the final harvest statistics are in, but it’s not good. What are you Northeastern guys seeing out there this deer season