For most of us, that very first rifle or a new set of shiny wheels probably ranks at the top... 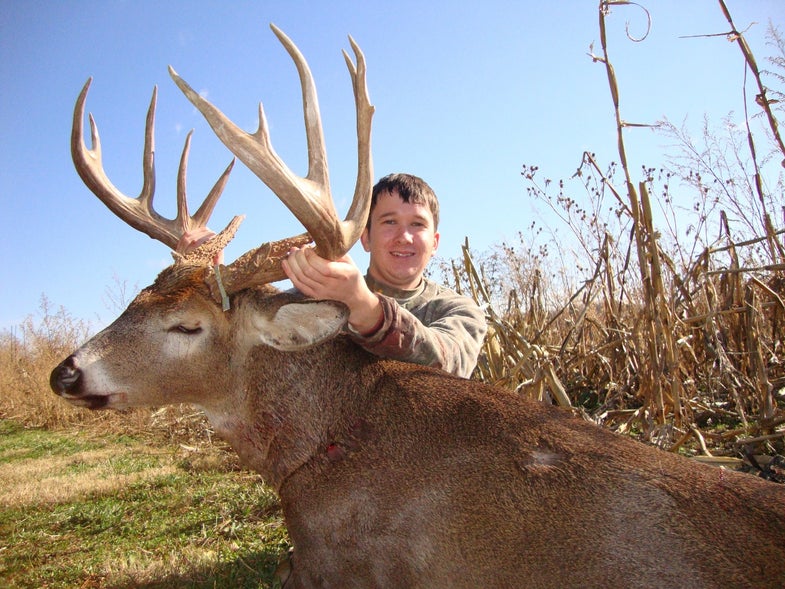 For most of us, that very first rifle or a new set of shiny wheels probably ranks at the top of our best birthday ever list. During my younger years, shouldering a new Remington 700 deer rifle and gripping the steering wheel of my first 4-wheel drive truck were two birthday memories that have never left this country boy.

However, a BBZ fan named Andrew Cooper recently sent me an email containing some phenomenal pictures of his last birthday present and he might have all of us beat.

In fact, I think every diehard whitetail addict would agree that a heavy-racked 14-pointer with approximately 200 inches of bone would be the ultimate birthday present. Here’s how Andrew Cooper tagged and bagged a buck of a lifetime shortly after blowing out his birthday candles.

For whatever reason, Cooper had a good feeling on his 20th birthday and something in his gut told him that he needed to hunt one of his favorite old stands. The Ohio shotgun season kicked off on November 29th and there was no doubting where this hunter would be sitting on opening day.

Over the years, Cooper and his friends had primarily utilized this particular stand to fill the freezer with doe meat. With the rut heating up, this particular area would definitely be a prime location to intercept a lovesick buck that was looking for some action. Around 8:30 a.m., Cooper realized his gut feeling was right, because an absolute monster with heavy mass and a swollen neck strolled to within 40 yards of his stand.

Without hesitation, the birthday boy quickly shouldered his shotgun and squeezed the trigger. A ground-shaking THUD from the echoing blast broke the early morning silence and left the rut-crazed bruiser dead in his tracks. Cooper could not believe how much mass this impressive buck’s rack carried. In addition, he was even more impressed by the deer’s extra-thick neck and hefty bodyweight.

Undoubtedly, this Ohio hunter had received the best birthday present that any deer hunter could ever wish for. Unfortunately, my birthday falls in March, which knocks me out of closing the deal on a dream buck. However, I wouldn’t mind hitting the woods with Cooper on his birthday next season.