Montana is no stranger to monster whitetails including several of the top typicals ever shot. In 1974 Thomas Dellwo shot... 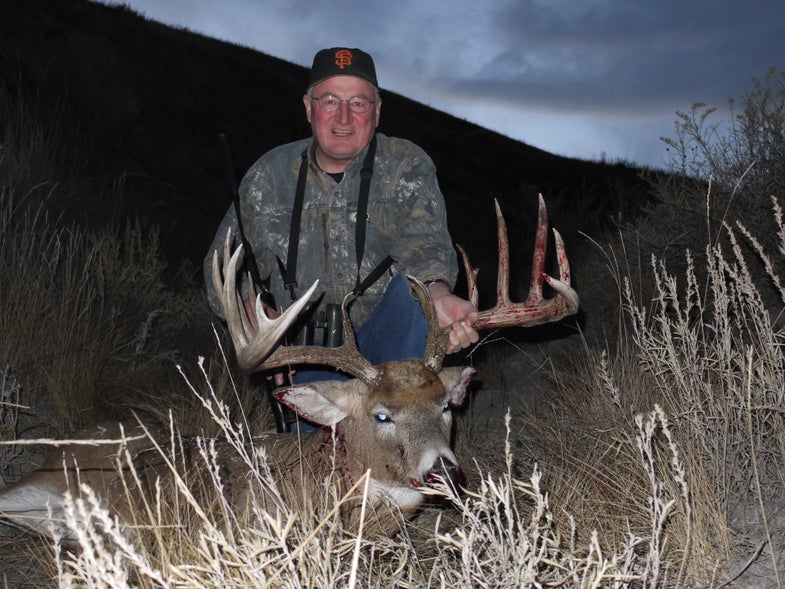 Montana is no stranger to monster whitetails including several of the top typicals ever shot. In 1974 Thomas Dellwo shot a massive buck in Missoula County. After the tape stretched across the antlers the buck ended up netting an impressive 199 3/8 points. In 1966 Kent Petry also made history by shooting a giant typical that netted 199 2/8 points in Flathead County, which coincidentally is adjacent to Missoula County where Dellwo shot his buck.

You can now add Tom Lewis to the roster of hunters lucky enough to take a Montana monster whitetail. This last fall Lewis was hunting in Toole County along the Marias River on a 2,000-acre ranch he and his wife have owned for nearly six years. In that time the pair has invested heavily in wildlife habitat including a conservation easement to the Rocky Mountain Elk Foundation that will never allow development on the property.

Of course the investment in habitat has paid off for Lewis, family and friends. Big game populations, including whitetail and mule deer, are thriving and sightings of mature bucks increases each season. Upland species have also benefited with tremendous upland hunting opportunities for ranch visitors. November 6, 2010, started out like most hunting days for Lewis. He had already put in four days of hunting and was sitting in a treestand along with his wife and 14-year-old daughter. Lewis was watching the riparian zone, but kept a watchful eye on a group of mule deer does on an adjacent ridge that were acting nervously.

Soon after Lewis spied the antlers of a large buck that at first he believed belonged to a mule deer. After more scrutinizing he discovered he was looking at a huge whitetail buck. The winds were gusting so the trio slipped from the stand and started stalking the buck bedded in the brush on the ridge. To get to the buck they had to slip through a soybean field and eventually a cornfield, but the high winds hid their crunchy approach. When Lewis was about 300 yards from the buck his wife and daughter waited and watched from that location as he continued on with the stalk.

Circling downwind Lewis was able to sneak to the same elevation as the buck and eventually crawled to within 120 yards of the bedded, and unsuspecting buck. Now he had to decide whether to risk a shot or wait for the buck to get up on its own. After reviewing the possibility the buck could simply get up and disappear over a steep ledge Lewis opted for a shot and found a hole through the brush. One shot later and the buck lay dead feet from its bed. Interestingly, Lewis used his trusty Winchester model 70 7mm Remington magnum that he’s had for more than 40 years topped with a new Swarovski riflescope.

The buck sports a 6×7 frame with an additional kicker point giving it a green gross score of more than 196 points. It should net in the 180s according to Lewis. This wasn’t the only big buck living on the ranch. Several days after Lewis shot his trophy two other bucks were shot on the ranch that scored 167 and 181 points.

Lewis is a well traveled hunter with a net-scoring 404-point bull elk to his credit, a 60-inch kudu and a giant cape buffalo with 46 ½-inch deep-drop horns. Nevertheless, he believes this buck to be his greatest trophy and is looking forward to next year because another buck that would rival his has already been spotted on the ranch.