Anyone who has ever climbed into a treestand during a cool November morning knows that the state of Kansas is... 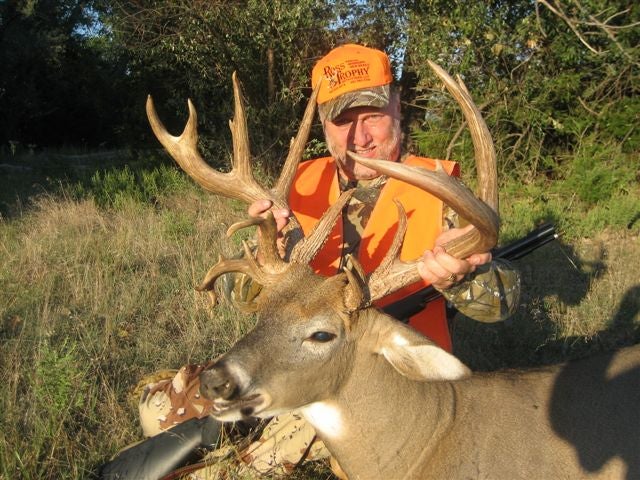 Anyone who has ever climbed into a treestand during a cool November morning knows that the state of Kansas is the home of giants. On a consistent basis, hunters tag mammoth whitetail bucks with heavy bases and extra-long tines that seem to touch the sky.

Just ask lifelong hunter Scott Branton what he thinks about the quality of hunting that is available inside of this remarkable state. Recently, Branton made the long trip up to Kansas from Mississippi just to have the opportunity to encounter that buck of a lifetime that we all dream about. To his surprise, that is exactly what he would come face to face with during the first morning of the Kansas muzzleloading season.

As luck would have it, Branton’s wife Dawn is really good friends with Perry Ross who owns and operates Ross Trophy Outfitters (www.rosstrophyoutfiiters.com). She decided to contact Ross and setup a deer hunting trip for her husband in the big buck country of Kansas. Dawn wanted to sit with her husband so Ross placed the couple inside of a strategically positioned shooting house that overlooked a major travel corridor. With this setup, Branton would be directly between a food source and buck bedding area.

Ross was hoping his friend’s husband would be able to connect with a high-racked 10-pointer that had frequently been seen in the area. This buck was amazing and would probably score well over 190, which would be a trophy for any hunter.

During the first morning of the hunt, Ross received a call from his friend Dawn around 7:30 a.m. and she seemed very excited. Immediately, Ross wanted to know if Scott had taken the giant 10-pointer. Ironically, the outfitter was a little let down when he heard the news that the high-racked 5×5 was still alive and well. However, Ross was completely blown away when he walked up on the buck that Scott Branton had actually shot instead. Over the years, Ross has wrapped his hands around some phenomenal whitetail racks as both a hunter and professional outfitter, but he could clearly see this deer was definitely in a league of its own.

Branton’s giant was carrying 14-points and unbelievable mass. The buck’s rack was heavy and thick from the bases all the way to the tips of each remarkable tine. With a net green score of 207, Ross feels this deer could possibly be a new Kansas State Record. On a side note, I think my wife needs to talk to Dawn about possible gift ideas. Hopefully, Dawn will give her Perry’s phone number and set me up with a Kansas hunt next fall.