An Accident Waiting To Happen

Many people were shocked when they heard about the man who was mauled and eaten by grizzly bears a few... 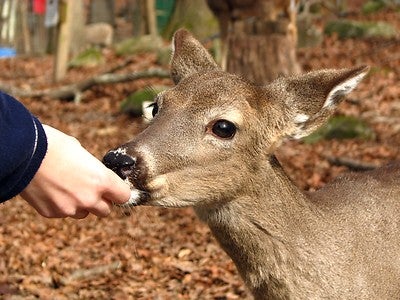 Many people were shocked when they heard about the man who was mauled and eaten by grizzly bears a few years ago. This guy had claimed that humans and wild bears could freely interact on a daily basis in complete harmony.

He shot numerous videos that seemed to actually prove his theory. However, his Disney perspective of nature and the outdoors proved to be a fatal and costly mistake. For the most part, the general public was surprised to hear the news, but the majority of hunters actually predicted this poor fellow’s demise way before it happened.

At the end of the day, a wild animal is instinctive, unpredictable, and temperamental to say the least. A wild creature can appear to be tame and meek, but at the drop of a hat it can dramatically change for no apparent reason. With that being said, I recently received a video clip from a close friend that reminded me of the man who lived and inevitably died with the bears. This video showed a guy hand feeding what appears to be a wild whitetail buck. The buck’s body language shows obvious signs of fear and nervousness, which can be a disastrous combination in the wild.

Over the years, there have been numerous documented incidents involving serious and even fatal attacks from whitetail deer. Without question, deer can be very docile, wary, reclusive, and timid. On the other hand, whitetails can also be super aggressive, brutal and violent under the right conditions.

Any hunter can tell you about the major transformation that mature bucks undergo just before and during the rutting period. However, does with fawns and any deer that is cornered, trapped, or faced with danger can also exhibit aggressive behavior. At the blink of an eye, Bambi can turn into Buckzilla, which is exactly why everyone should always exercise extreme caution around any whitetail deer or wild animal for that matter.

As for the video, I hope this guy never finds himself on the business end of those long tines. Things could get really ugly in a toe to toe or toe to hoof battle with this buck, especially in close quarters. Luckily, all the deer in my neck of the woods are smart enough not to make house calls or knock on doors. In fact, it’s a safe bet that a buck with kind of headgear wouldn’t last too long walking around in my neighborhood.