Last week the kids were on spring break, and despite having an inbox that is overflowing with deadlines, I took... 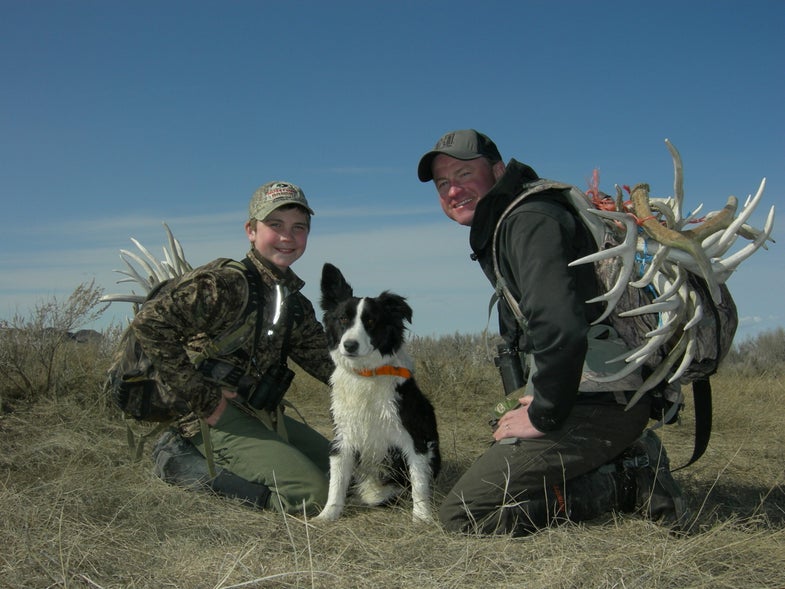 Last week the kids were on spring break, and despite having an inbox that is overflowing with deadlines, I took time off to grab some fresh air. My wife, Sharon, and I spent time scouting for elk.

My daughter Katelyn trained her new horse with our help, and my son Cole and I headed to Montana for a shed-hunting adventure. My friend Gale Smith joined the outing, along with our dog Sage.

Unfortunately, when we reached our destination, tides of spring floodwater was pouring in. The hot spot was completely underwater and periphery zones were covered with silt and leftover icebergs.

Luckily I had packed hip boots and donned them to wade to the good spot. While I was teetering on, going too deep, Cole and Gale hiked the uplands. At midday we joined up for lunch, and I soon discovered that I had headed in the wrong direction.

While I was tiptoeing and trying to find a submerged antler, Cole was scooping up big ones on a neighboring meadow. Gale also headed in a slightly wrong direction, which he later blamed on me. What can I say? I picked up antlers before in the locale he had searched.

Cole’s big find was a 6-point shed that would score in the low 160s if the other side had matched. Unfortunately, we never did find the other side. I suspect it’s lying at the bottom of the flood-created inland sea.

After lunch we started jumping from iceberg to iceberg, and in between jumps we slopped through flooded muck. Sheds were hard to find since they no longer shined due to the muck paint job each one sported.

I finally did find two whoppers. One was a clean 5-point that would go in the high 150s if the other side had matched, and the other was an ancient 4-point shed that sports 5-inch mass measurements throughout.

Despite the adverse conditions, we had a great time. Our dog Sage even started getting into the act and may make a shed-hunting dog yet.

If you want to talk about shed antlers and whitetail hunting, join me at the Wisconsin Deer and Turkey Expo, April 1-3, in Madison, Wisconsin.