A Monster Start For A New Hunter

Most whitetail addicts enter the brotherhood of deer hunting by knocking down a slick-headed doe or a young basked-racked buck... 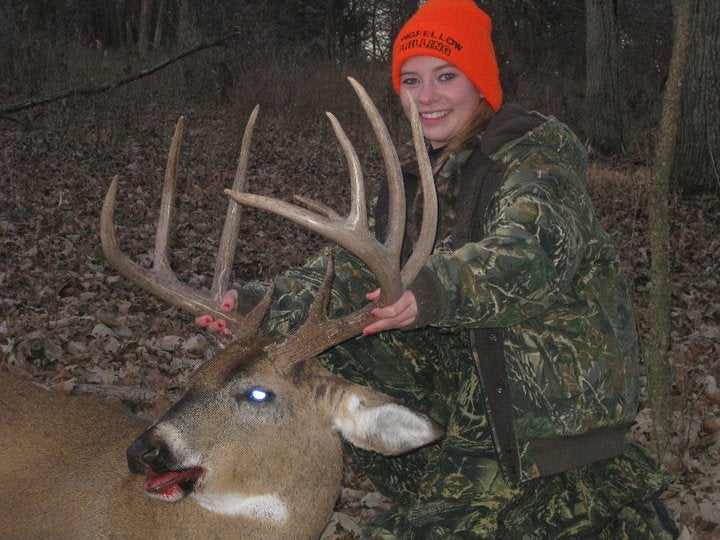 Most whitetail addicts enter the brotherhood of deer hunting by knocking down a slick-headed doe or a young basked-racked buck when they squeeze the trigger for the very first time.

However, some hunters skip the small stuff and end up tagging a top-heavy giant right out of the gate. Is it beginners’ luck, good fortune, fate, or simply being at the right place at the right time?

Maybe it’s a combination or special mixture of all three possibilities. However, in many cases, a young or beginning hunter is able to drop the hammer on a monster buck by hitting the woods with a good teacher or mentor. Consequently, this is exactly what happened to a young lady named Brook Rychnovsky during a very special late-season hunt in southern Iowa with her father.

For the last few years, Brook had been spending a lot of time in the field with her father Mark Rychnovsky. These weekend trips usually involved deer scouting or chasing fired-up longbeards during the spring. Like most typical teenagers, Brook maintains and juggles a chaotic schedule that involves school, volleyball, track and basketball.

With that being said, it’s extremely difficult for Brook and her father to spend any quality time together. Fortunately, nature and the outdoors have provided this father and daughter duo with an outlet. These two are able to escape the rat race of life by simply hunting together on the weekends.

Needless to say, Brook could not wait to climb into the deer blind with her old man during the Iowa late muzzle-loading season. For good reason, Mark Rychnovsky had done his homework and knew there was a good chance his daughter could take her first deer.

He had been seeing several really nice 140 to 150 class bucks, which would be perfect for Brook to bump into with her smoke pole. As luck would have it, none of these deer showed up during their trip, but a true Iowa bruiser with extra-long tines and heavy mass did step out of the shadows and offered the teenage hunter a chance of a lifetime.

Unfortunately, the buck approached their blind on the wrong side and Brooke was forced to shoot with her opposite hand. Without hesitation, this athletic hunter switched shooting positions and fired a fateful shot that would inevitably make a lot of older hunters green with envy. When the thick cloud of smoke finally cleared, the father and daughter team eagerly watched as their high-racked monster hit the deck.

In a matter of seconds, Brook Rychnovsky and her father walked up on an unbelievable 9-pointer that would score in the 170’s, which is a great way for any hunter to start a lifelong deer hunting tradition. All of us on the BBZ would like to congratulate Brook and her father Mark on both a phenomenal buck and memorable season.