Oldie but a Goodie

While inventorying my pile of rotting skulls waiting for their Jacuzzi treatment I realized I forgot to share with you... 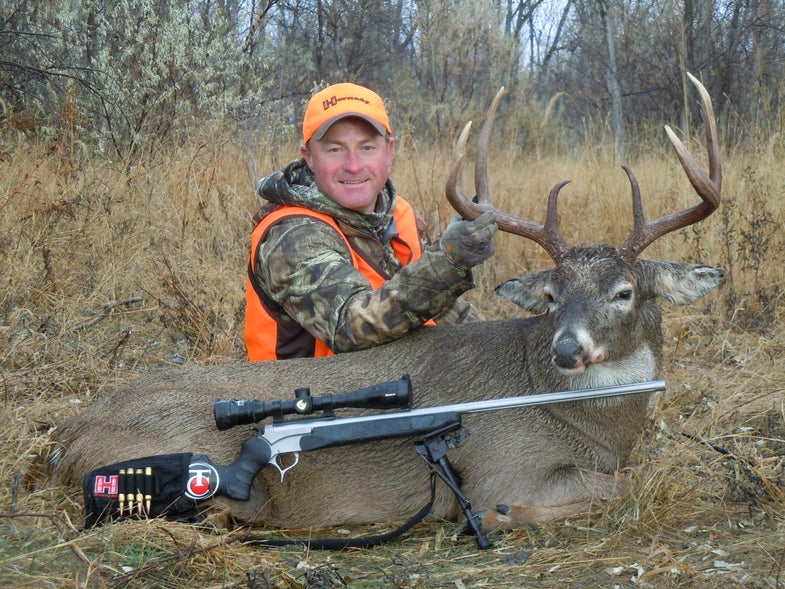 While inventorying my pile of rotting skulls waiting for their Jacuzzi treatment I realized I forgot to share with you the old timer I ambushed this past hunting season. I was back in South Dakota hunting a property I manage with several other hunters. Our goal is to shoot mature deer and let anything 3 1/2 years or younger walk. One of the bucks that had been walking wasn’t by choice. He was being as slippery as a socket wrench that accidentally fell into a pan of waste oil.

I first set my eyes on the buck three seasons ago. I suspect he was at least 4 ½ years old by the brawn of his frame and the bulk of his front shoulders. He sported a decent rack, but his main downfall was the fact that he only had three points on his left side. His right side sported four.

Although I got a good look at him, it was through a spotting scope and that was as close as I could get. I never saw him in shooting range and it was a good thing. I shot a bruiser buck at the end of the season and had I filled my tag on the 3×4 I would have been out of the game.

In 2009 I figured he’d be bigger and trail camera photos proved he had survived and gained mass. Nevertheless, he was still a 3×4. I scouted the property and spotted him a couple days before season. When season opened I hunted hard for a bigger buck, but after several days I decided to go after the 3×4 instead of settling for a younger buck with potential.

He gave me the slip again.

I looked in every nook and cranny of the property hoping to catch him in an embarrassing moment of weakness with a doe, but to no avail. I ended up shooting a crazy-looking 6×7, but I would have been happy with the old timer.

Last season I decided again to target the 3×4. He was already showing up on my friend’s trail camera and surprisingly, in the same place as always. Instead of hunting all over the property I camped on his home territory and set up watching a pinch point between two large sections of bedding cover.

On day four of the season the old timer couldn’t help himself.

A doe walked from the cover and began browsing in an opening. Minutes later the brawny buck followed. My Nikon EDG binocular (www.nikonhunting.com) confirmed it was the 3×4, but he was nearly 300 yards away and busy doing laps around the doe. Finally he stopped to rub a willow tree and I sent a Hornady GMX (www.hornady.com) bullet on its way.

I found him a short time later and was truly pleased with the results. Not only did he sport a heavy frame with long, polished points, he had the body and look of a senior citizen buck. How old was he? I’m not sure, but I estimated him at 6 ½ or older based on tooth wear and how many years we’d been seeing him.

It really didn’t matter though. He was a mature deer that gave me the slip for several seasons and finally getting to put my tag on him was a privilege.