Hunter and guide Adam Gronning recently shared his adventure of a last-minute hunt he was able to slip in last... 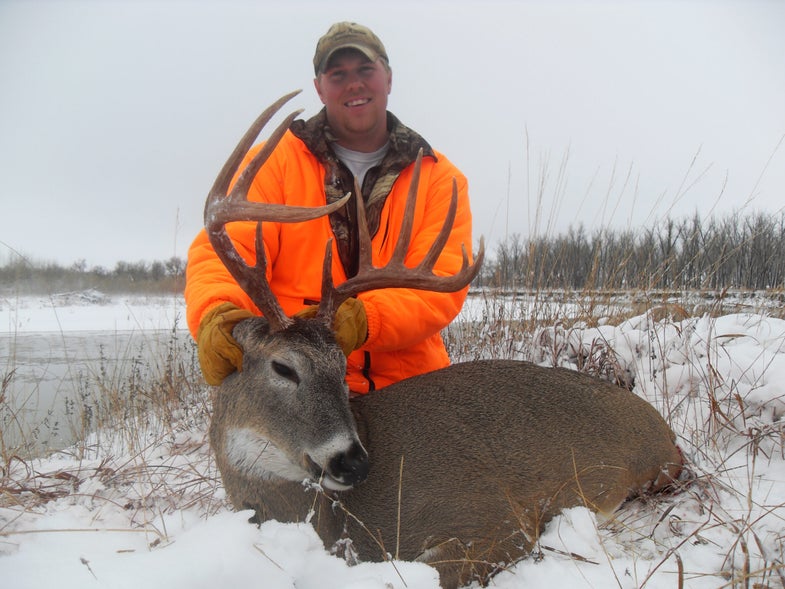 Hunter and guide Adam Gronning recently shared his adventure of a last-minute hunt he was able to slip in last season on the Powder River. Gronning guides for Powder River Outfitters located in southeast Montana.

The Powder River is an iconic name on its own, but Powder River Outfitters has been providing hunters with quality hunts in some of the most deer-rich country in the West. I’ve hunted this portion of Montana for years and I’m still amazed at the massive bucks hunters tag each season.

Montana’s deer season closes the weekend after Thanksgiving and most outfitters finish their hunts prior to the holiday. After getting the last hunter’s tags filled, Gronning and fellow guide C.J. Gaskill decided to do a little hunting of their own before the season finished. A few days earlier Gronning had filled a client on a massive 4×4 whitetail buck that gross-scored in the mid-140s. But during that hunt he had seen an even bigger buck that gave them the slip.

Gronning and Gaskill targeted that portion of the river bottom and while executing a slow drive through the bottom they spied a large buck sneaking ahead. When they reached an opening they rejoined and hatched another plan. Gronning would sit tight and Gaskill would swing wide and move the through a dense patch of Russian olive trees to possibly nudge the big buck to backtrack where Gronning would be waiting.

Deer immediately started slipping by Gronning as Gaskill started his stalk, but most were does with the occasional small buck. Suddenly Gronning spotted a big buck in an opening hardly 50 yards away. Quickly sizing up the buck he knew it was the deer they were after with long main beams and a 5×6 frame. Gronning snapped his .270 to his shoulder and dropped the buck on the spot.

Gaskill soon joined Gronning as they admired the mature whitetail. Later the duo scored the buck at 151 points. But the story doesn’t end there. Gaskill said he saw an even larger buck in the brush complete with split brow tines and sticker points. Oh well, there’s always next season!