In recent years, country music star and hardcore outdoor enthusiast Craig Morgan has been extremely busy rocking both the stage... 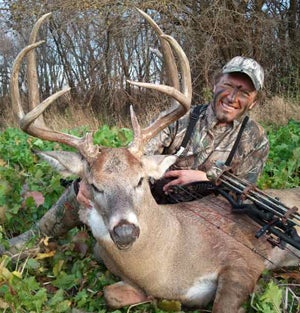 In recent years, country music star and hardcore outdoor enthusiast Craig Morgan has been extremely busy rocking both the stage and the deer woods. Over the past several seasons, this country boy from Tennessee has been fortunate enough to decorate his wall with a lot music awards and thick-racked whitetail bone.

You can actually see many of Morgan’s action-packed deer hunts on his new high-energy show called “Craig Morgan’s All Access.” According to Morgan, one of his favorite times to chase monster bucks on film is during the opening days of the archery season. Here’s how he does it.

Scout Like You Hunt
Anyone who has ever hunted around Morgan before knows that he is dead serious about scent control. In fact, he washes all of his clothing with scent-eliminating detergent and stores these items inside sealed bags. Next, he showers and shampoos with odor neutralizing soaps before entering the woods. Lastly, Morgan always wears rubber boots, gloves and dresses directly in the field to avoid spooking deer. These same painstaking steps are utilized during all of his pre-season scouting during the late-summer months.

Utilize 24/7 Surveillance
In order to consistently tag giants, Morgan also relies heavily upon high-tech scouting techniques. He believes that constant surveillance is needed to keep you right on top of the big dogs, especially during the early days of season. “I depend on my arsenal of trail-cameras from Wildgame Innovations to keep me up to date on current buck behavior, daily habits, and pattern shifts. When I hunt a new area on the road, I like to hang several trail-cams near other possible stand locations that I am not hunting. This allows me to cover more ground by monitoring buck activity around other setups that might be more productive,” explains Morgan.

Capitalize On Predictable Patterns
During the early days of season, Morgan likes to take advantage of predictable pre-rut patterns that are typically based on current food sources. “In most cases, bachelor groups of bucks can be exploited when entering or leaving a particular feeding area. The trick is to hang multiple stands that will enable you to hunt varying wind directions during both morning and evening hunts. Over the past several seasons, following these three simple strategies have made it possible for me to pinpoint, pattern and connect with early pre-rut bucks all across the country,” says Morgan.