Trophy Dilemma: What to Do When a Landowner Wants Your Buck

Usually when you take a huge buck, that deer is considered your trophy, no questions asked. You get the mount,... 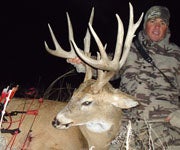 Usually when you take a huge buck, that deer is considered your trophy, no questions asked. You get the mount, the meat and the memories. But as archery shop owner Al Kraus learned, that’s not always the case …

A man stopped by Black Hills Archery a week after the general rifle season ended in South Dakota, to tell the owner, Al Kraus, about a monster whitetail buck he missed during the rifle season. The customer described it as “the biggest buck I’ve ever seen.” The comment perked Kraus’ interest, but he suggested that the customer try to kill it himself.

The man dismissed the idea, saying he was in no position to go hunting. The gentleman was out of work and hard on luck–he recently lost a barn and his bow to a fire. Kraus offered to set him up with a bow so he could go on his hunt, but the customer politely turned down the offer. Instead, he suggested an idea that caught Kraus’ full attention.

“You should come out and try to kill him with your bow,” said the customer.
With the invite in hand, Kraus grabbed his bow and set out with the customer to find this monster buck. Kraus is no stranger to hunting trophy animals. He recently brought down Stickers, a 184-point South Dakota buck. Many might’ve thought he’d celebrated and pack up his bow for the season after that buck, but he only celebrated. He kept his bow ready and he maintained a valid open archery license for the prairies near his shop.

The two men drove out to the area where the buck was spotted, and decided to set up on a field nearly 700 yards away to wait for the buck to come out to feed. They watched as deer started spilling from nearby timber–a giant buck was among them. Kraus focused his spotting scope on the buck and quickly estimated the score at more than 180 points.

The customer was right about the buck. Unfortunately, it spent most of its time on a neighbor’s land that didn’t allow hunting. Despite that knowledge, Kraus knocked on the neighbor’s door and introduced himself as a bowhunter who’d like permission to hunt on the property. The landowner was an old trapper and admired Kraus’ determination to shoot the buck with a bow. He eventually granted Kraus permission.

But Kraus knew the more difficult portions of the hunt were yet to come. He didn’t hit the woods immediately after getting permission; he chose to observe the buck instead–at least a dozen times to try to determine a pattern. Once he felt confident about the pinch point and the wind needed, he waited for the right conditions.

It took several days before the evening wind was suitable enough to go hunting. He hustled to the ambush site, but the wind was unforgiving near the trees. Kraus relocated to a small corridor between junked machinery and hunkered behind an old windrower. Deer passed by him at 35 yards or less, but the giant was nowhere to be seen. He left at dark, determined to try again.

The wind was howling during Kraus’ next attempt. To make matters worse, the landowner had pushed all his cows through the timber earlier, bumping all the deer from the cover. Kraus was moving to some nearby haystacks to wait when he suddenly spied deer coming from open country to the north. A quick look with his binoculars revealed that it was the bruiser following a small fawn.

Kraus predicted that if the deer continued on that path, they’d follow along a fence and be within shooting range from a stack of 55-gallon drums he could hide behind. He made the move and drew just before the fawn walked into view, 30 yards away. The fawn looked interested in the bawling cows corralled nearby, and the buck seemed focused on the fawn. With the wind whipping, Kraus compensated for drift and released an arrow from his Mathews Z7 bow. It hit true and the buck bounded less than 40 yards before bedding and expiring in the open field.

Kraus was overwhelmed with emotion as he walked up to the giant buck, which was later examined and aged at 7 years old and gross scored 193 points. He stopped by the landowner to show off the buck and share the success.

“Is that a big one?” asked the landowner.
“It’s as big as they get around here,” replied Kraus.
“It sure would look good on my wall,” said the landowner.

Suddenly, Kraus found himself in a pickle. It took days of planning and patience to take down the buck, and he wanted to display his trophy. But he would’ve never had a chance at this monster without the landowner’s permission. His elated mood was fading fast. Thinking quickly, he told the landowner he’d get a replica made so they both could share the experience. The replica cost Kraus $1,000. Some might find that expensive, but Kraus ended up with another trophy buck on his wall and an invite back to a spectacular whitetail property.

What would you have done if you were in Kraus’ shoes?