The Velvet Gloves Are About to Come Off

The gloves are coming off, or more precisely the velvet will be stripped from the antlers of whitetails in the... 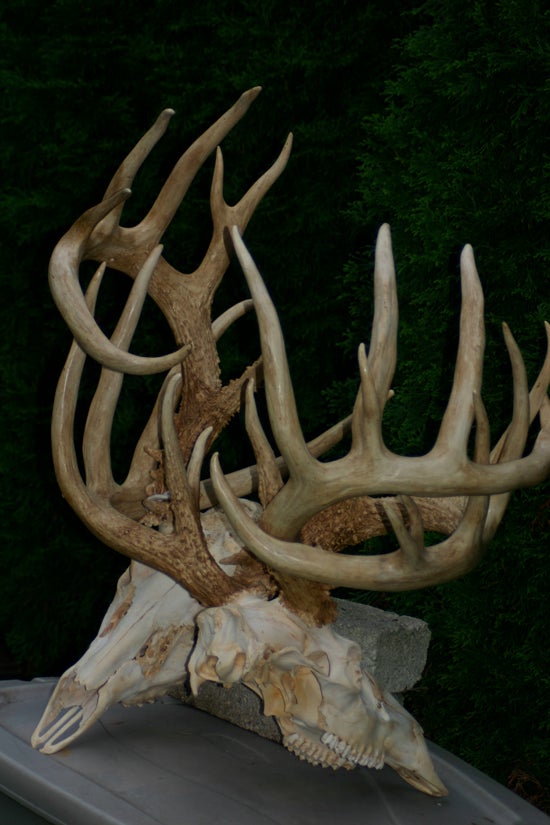 The gloves are coming off, or more precisely the velvet will be stripped from the antlers of whitetails in the next two to three weeks. When it does whitetail bucks will begin setting the pecking order in respective whitetail neighborhoods. It’s a right of autumn and bucks use it to establish dominance, but other than advertising who won the strongman contest, it does little in the world of whitetail breeding. Too many does come into heat in such a short window that everyone gets a bit of the action, albeit the dominant bucks likely get a bit more.

Nevertheless bucks will begin sparring soon and battling later. In the process a few will undoubtedly lock antlers and end up curios like this pair found in northeast Montana at least two decades ago.

Locked antler collector Ron Foss (313- 277-3009) who resides near Detroit, Mich., came across this giant Montana locked set a few years back. The story told to Foss was that a local farmer was pushing cattle to a reservoir to water when he noticed the area around the reservoir was trampled and tore up. Looking closer he spotted something odd in the mud under the water. Was it a sunken branch, a bush or something else his cows might get tripped up on in the muddy water? Reaching into the murky water he yanked the locked set of antlers from out of the depths.

At the time the landowner didn’t realize, but in his hands he held not, one, but two world class whitetails forever locked in their death struggle. After acquiring the racks Foss discovered the typical whitetail scored 198 and the non-typical tallied an even more impressive score of 230 gross points. Incredibly, both bucks net large enough to easily make the Boone and Crockett all-time awards.

Foss added this giant locked set to his growing inventory of 30 locked sets that includes 27 whitetails, two caribou and one mule deer. He’s been on the hunt for a moose and elk locked set to round out his collection. Foss, along with his brother Don, travels the Midwest displaying his jaw-dropping collection with several appearances in his home state of Michigan at area sports show. He even appraises locked sets and any large shed antlers for interested antler connoisseurs. You can be sure that in the coming months as
deer species begin setting the pecking order, Foss will have another locked set or two to contemplate adding to his collection.