Without question, the opening weeks of archery season can be the perfect time to intercept a shooter buck. Predictable early-season... 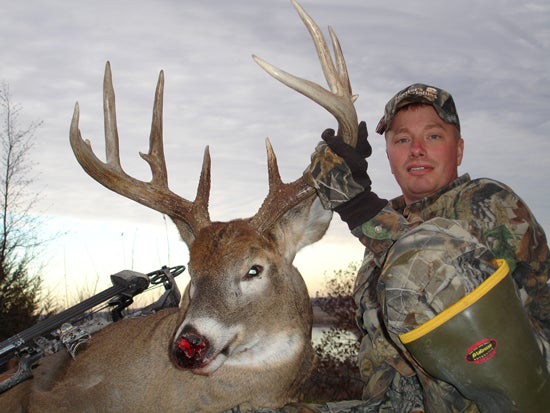 Without question, the opening weeks of archery season can be the perfect time to intercept a shooter buck. Predictable early-season patterns, minimal hunting pressure, and several other factors make this period a very special time to be in the stand. Currently, many states are allowing deer hunters to hit the woods throughout the month of September, which creates a window of opportunity for those willing to ignore the heat and hungry insects.

Here’s where to hunt.

Hot daytime temperatures and heavy green-plant forage diets can make watering holes high-traffic areas throughout the early season. According to Matt Morrett of Hunter’s Specialties, watering sites can be big buck honey-holes, but there are some key factors that hunters need to consider before hanging a stand. Morrett prefers to avoid open-area locations and setup along secluded watering holes that are surrounded by protective cover. These areas often create a false sense of security that encourages mature bucks to grab a cool drink during the daylight hours. In fact, this particular setup allowed Morrett to tag a pair of giant bucks from the same exact stand two seasons straight.

Undoubtedly, it’s pretty hard to beat any stand setups near or around soybeans during the opening weeks of season. Once again, setups that focus on fields enclosed by thick cover and away from major roadways are more likely to produce super close encounters with veteran bucks that have survived a few seasons. The smaller narrow plots of soybeans that branch-off from the primary field will also be ideal places to hang a stand for top-heavy bucks. For good reason, these smaller isolated plots generally receive less human traffic and disturbances. These areas can definitely be hotspot locations, especially after mature bucks start sensing and feeling a little outside hunting pressure.

Unfortunately, all of us don’t have access to lush agricultural food sources like soybean fields. I live in the heart of the Appalachian Mountains where there simply is not a lot of farm land. However, I have been able to score big during the early season by taking advantage of alternate hotspot setups. For example, leafy Kudzu patches also produce a bean that drives whitetails crazy. Over the years, I have punched several buck tags from this alternate early-season food source during the opening weeks.

Another option is to target mineral licks that have strategically been placed near bedding areas. Long-tined bucks will often linger at these sites when traveling to and from the bedding area, which can possibly create a shot opportunity on one of those tough nocturnal giants. Hopefully, these hotspot setups will generate a close encounter for me this weekend in my home state of Kentucky.

We would love for you to share any of your scouting and hunting reports with the rest of the big buck clan!