It was the 2007 hunting season in Kansas when the 135″ eleven pointer with split brow tines first showed up... 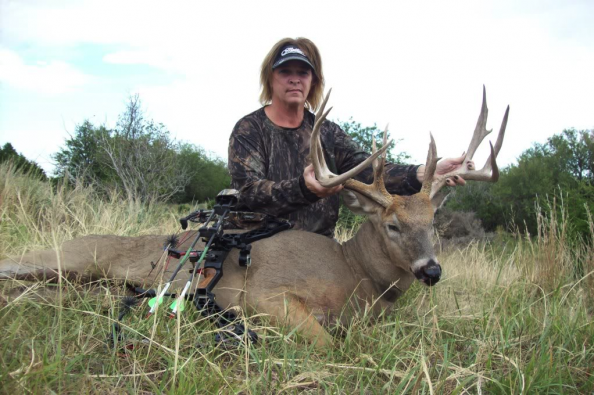 It was the 2007 hunting season in Kansas when the 135″ eleven pointer with split brow tines first showed up on Richard Frisbe’s trail cam. That year the buck appeared frequently and presented Richard with many shot opportunities, but as a young 2 ½-year-old deer he needed time to grow. Richard knew this buck would really be something special once he grew his fourth or fifth set of antlers. He named the deer the Splitter buck.

In 2008, Richard was anxious to see the Splitter buck and see how much more antler he had put on, but the buck never showed up. Again in 2009 the Splitter buck was nowhere to be found. Had the buck been hit by a car? Shot by another hunter?

While scouting during the 2010 season, Richard noticed three giant bucks chasing a doe and immediately recognized the split brows on the Splitter buck’s rack. Over the next four days, Richard watched the Splitter buck chasing does nearly four miles from his hunting property. A few weeks later Richard finally got trail camera pictures of the Splitter buck back on his property, but unfortunately he was busted up. Richard would have to wait for the 2011 season for his chance at the deer.

For the next three months, Richard and his wife Maggie kept tabs on the buck getting trail cam pictures on a regular basis. Oddly the buck disappeared four times over the three-month period and after analyzing the trail cam photos Richard realized the buck would leave every full moon cycle and would return 10 to 12 days later.

On September 19, the opening day of the Kansas archery season, Rich and his wife Maggie headed out to hunt a big 8 pointer and the Splitter buck. The Splitter buck had not been on camera for the last eleven days so Rich and Maggie expected him to return any day. The morning hunt came and went with Richard seeing a few small bucks and Maggie coming up empty handed.

That evening Richard and Maggie discussed stand locations and headed out. Richard went to his stand and Maggie went to a ground blind they had set up a few days prior to the season.

Around 6:30 p.m. the Splitter buck stepped out and headed down the trail that would lead him right in front of the ground blind Maggie was set up in. As the buck closed the distance, Maggie drew back and sent an arrow through the Splitter buck at just 17 yards.

After the shot Maggie whistled for Richard who was not too far away. When Richard saw Maggie, she was in total shock as she told him, “I shot Splitter.”

Richard and Maggie headed back to the ground blind to look for the arrow and pick up the blood trail. The arrow was 40 yards away from where the buck had been shot and was covered in blood. After a half hour of searching through thick, nasty brush, the blood trail started picking up. After 150 yards they had found the Splitter buck!

It was a bittersweet moment when they walked up on the deer. Here was a magnificent animal they had watched grow over the last six years. He was a true giant. The buck scored a whopping 189 6/8 inches and had a 22-inch spread. On hoof he weighed 300 pounds. Congrats to Maggie Frisbe on the Splitter buck, it’s one well-earned deer.