Justin Corn, an active duty Army E5 Sergeant, recently killed a giant non-typical that might be the new Kentucky non-typical... 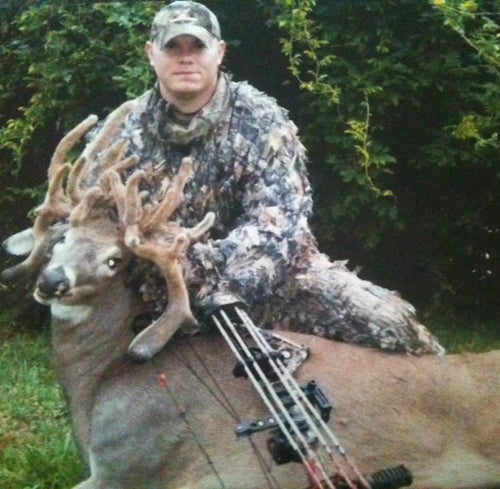 Justin Corn, an active duty Army E5 Sergeant, recently killed a giant non-typical that might be the new Kentucky non-typical archery state record. This amazing buck has at least 30 velvet-coated points that include stickers, kickers, and a whole lot of extra junk. Here is an inside-look at how Corn connected with a monster deer that has been aptly nicknamed the “Cactus Buck”.

When the early Kentucky archery season finally rolled around, Corn could hardly wait to grab his bow and hit the woods. Over the past several years, he has spent a lot of time in both Afghanistan and Iraq serving his country. As a die-hard deer hunter, it’s been hard on this soldier to be away from home and give up his hunting time during the fall. A few days ago, Corn took advantage of some much-deserved time off and visited one of his favorite whitetail honey-holes inside Fort Knox.

On this particular hunt, he strategically positioned himself behind a giant oak tree that overlooked a dried-up creek bed. The area lacked any suitable trees to hang a stand, and he was forced to setup on the ground. However, Corn’s wide-bodied oak tree was split down the middle, which offered the hunter both cover and good visibility. Falling acorns had also covered the entire creek bed and Corn knew there was a good chance that he might be able to intercept an early season shooter.

Shortly after getting situated, crunching leaves and popping acorns grabbed his attention. A slick-headed doe slowly walked into view with another deer directly behind her. Corn could clearly see the second whitetail was a giant buck and he immediately started trying to pick out a shot. Without hesitation, he used the cover of the split oak tree to draw his bow and aim at the velvet-coated monster that was standing 40-yards away. The arrow found its mark and Corn watched the buck pile-up within sight of the winding creek-bed, which brought a dramatic end to his season in the Bluegrass State.

On a side note, area biologists examined Corns’ “Cactus Buck” and some interesting information has come to light. The biologists estimated that the unusual 30-point buck is about 5 years old. They also believe the buck has never shed its velvet-covered antlers. After the mandatory drying period, Corn’s trophy will be officially scored and it’s possible the deer may break the non-typical state archery record which stands at 234 1/8 inches taken in 1997.

Congratulations Justin on one heck of a buck, and thank you for the sacrifices you have made while serving our country.