For years James Edwards and his hunting buddies had been searching for a property they could manage that was within... 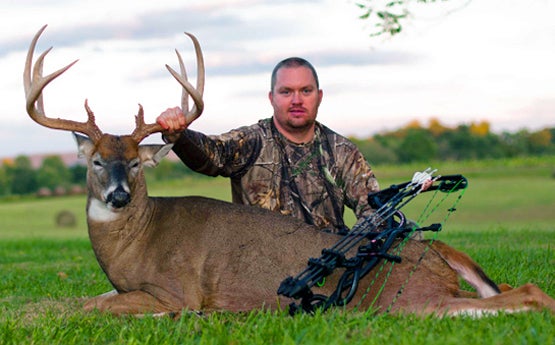 For years James Edwards and his hunting buddies had been searching for a property they could manage that was within reasonable driving distance from their home. They finally found that property in a 670-acre lease in Ohio earlier this year. With a commitment to each other to follow strict management guidelines, the two hunters agreed to only harvest mature bucks and does.

Early season began with a focus on balancing the herd and James concentrated on filling his three doe tags. He’d worry about killing a big buck come November. On his first evening hunt he took his first doe and two days later took his second doe. That evening a big buck came through and James bit his tongue as he let the buck walk and lost some sleep that night wondering if he had made a mistake.

James was hunting out of a small maple tree overlooking a CRP field that the deer were using as a bedding area and the little maple was proving to be a killer stand. With the winds picking up on the fourth day of the hunt, James headed for the little maple, got settled in, but then started thinking about moving further into the woods to duck out of the wind. It wasn’t a move that James would typically make, but on this night it just felt right.

The big red oak proved to be a solid choice on the windy evening and as the winds continued to blow, the red oak rained acorns on the forest floor below. Then around 7:00 p.m. the winds suddenly stopped and the air was calm; it was the perfect storm for getting James into the oak stand without spooking any deer, something he wouldn’t have been able to do on any of his previous hunts that week.

With camera in hand, James snapped one last photograph of the setting sun from his treestand and packed up the camera. A few minutes later the leaves crunched as a group of ten does came in to feed on the acorns below. The does smelled James and tried to pick him out of the tree, but never really spooked.

As James watched the does stomp and jerk their heads, he heard deer approaching from the CRP field, the same CRP field the bucks were bedding in. With a small tree blocking his view, James couldn’t see the buck until he was less than 20 yards away.

One look was all it took for James to know this was a shooter. As the buck fed on acorns James came to full draw with the buck slightly quartering to him at 8 yards. With his pin settled on the buck’s vitals, James talked himself out of pulling the trigger and waiting for the buck to turn broadside before releasing the arrow. At a mere 5 yards, the buck turned broadside and James sent the arrow on it’s way. He made a good shot through the buck’s vitals, or at least so he thought.

The buck ran off, but James never heard him crash. He climbed down from his stand and looked for blood, but didn’t find much sign. Now beginning to worry about the shot, he backed out and decided to return in the morning. After a sleepless night, James returned early the next morning to begin the search. James started questioning his shot and wondered if the arrow hit the shoulder and the buck would still be alive. He headed for the CRP field to begin his search and after ten minutes he found a bed with blood in it. This boosted James’ confidence. Only ten more yards later James found his buck dead. It was his biggest deer to date.

James believes in hunting mature bucks close to their beds in the early season. Over half of his bucks have been taken during the first week of October on evening hunts as the deer got up from their bedding area and headed to feed.