Post-Grad Picks Up Bow Hunting and A 6-Point Buck

Kerri Calandra was looking for a hobby after graduating from college and starting her job at an urgent care center... 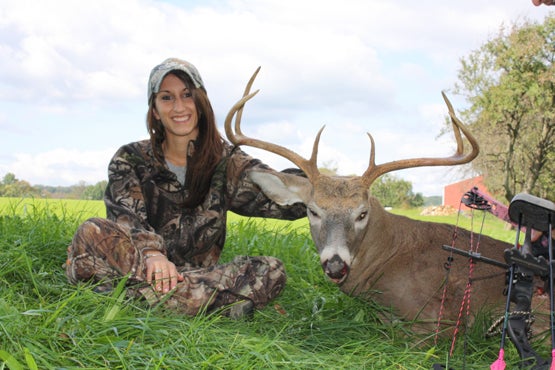 Kerri Calandra was looking for a hobby after graduating from college and starting her job at an urgent care center in New Jersey when she picked up bowhunting. It’s not the first thing you would think a Jersey girl would do with her free time, but hearing all the hunting stories from her friends intrigued her. She made it out just in time for the fall season in 2010 and took her first buck.

Fast forward to this fall and Kerri was back out in New Jersey going after a chocolate-racked eight-pointer she had seen with the crew from Outdoors Addiction. Kerri had hunted this spot a number of times and had several pictures of the 8-pointer during shooting hours. Although the buck’s movements were somewhat sporadic, it walked by the trail camera at 10 a.m., 5 p.m. and 6 p.m. on several occasions.

Kerri had sat in the stand a few times and hadn’t seen the buck she was after. One sit didn’t even yield a deer sighting, but Kerri stayed motivated and patient. On the drive home that night, Kerri spotted the buck in a nearby field and fell in love with him–this was the one to which she would dedicate all her time.

With a cold front moving through in early October, Kerri was back in the stand and hoping the weather system would get the buck up and moving. At the sound of a snapping twig, Kerri turned around to see a wide six pointer headed her way. Her heart flipped and she forgot all about the chocolate-racked eight pointer.

The wide six approached Kerri’s stand head-on and with the buck 15 yards she had to wait for her shot. All Kerri could think about was getting the wide six on the ground. Slowly, the buck began to turn, giving Kerri a slightly quartering-toward shot. As the buck turned its head to look at a deer approaching from behind, Kerri seized the opportunity and took the shot. The arrow flew true and she found the buck piled up a mere 40 yards away. It was an amazing feeling, Kerri says, and something she hopes to repeat for many seasons to come.