Last year I took my first trip to the Midwest to hunt whitetails and I ended up in Kansas. The... 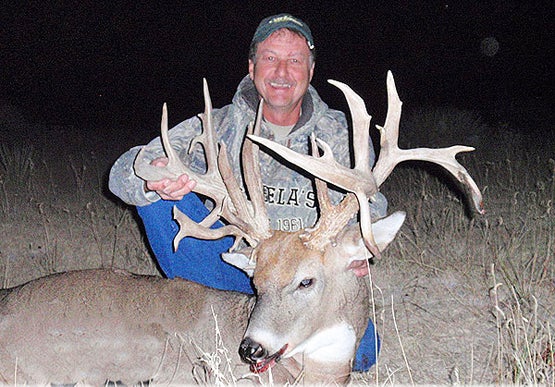 Last year I took my first trip to the Midwest to hunt whitetails and I ended up in Kansas. The outfitter said it was “the land of the giants” and “the next world record whitetail could step out from behind any tree.”

Well, that may have just happened to Scott Carlson who recently shot the new potential number one muzzleloader buck in Kansas.

Scott first saw this buck three years ago when it showed up on his trail camera. The buck’s massive rack has all the features of a record book whitetail: drop tines, extra points, a split brow tine and heavy mass.

Congrats to Scott on the buck of a lifetime!

This buck was first reported by North American Whitetail.

To find deer movement predictions and the weather forecast for where you hunt, go to OL Weather. _
_