Sometimes You’ve Just Got To Hunt!

With deer hunting, you’re not always going to face an ideal situation. In fact, it’s more likely that you will... 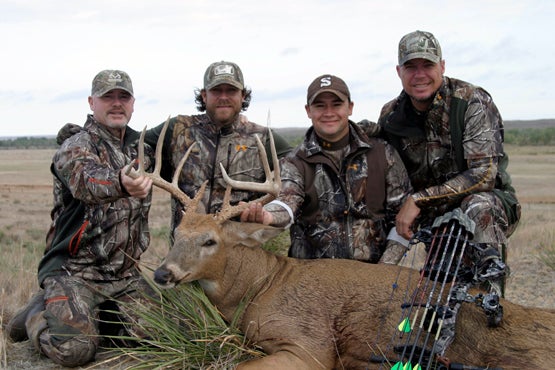 With deer hunting, you’re not always going to face an ideal situation. In fact, it’s more likely that you will encounter the exact opposite hunting conditions that you need on any given hunt. The weather and hunting conditions always seem to be great the day before you hit the woods or after you leave the field.

However, it’s extremely important to realize deer hunting is a full-contact sport and sometimes you just have to climb into your stand, regardless of what it’s doing outside. This is exactly what Jason Gordon had to do during a recent bowhunting trip to Oklahoma. Here’s how Gordon adapted his hunting strategies, changed stand locations, and faced horrible conditions in order to bust a wall-hanger on the last day of his hunt.

After a couple days of hunting, Gordon spotted a nice 10-pointer about 500 yards away. Without hesitation, he moved his stand closer to where the buck was last sighted. About two days later it appeared–Gordon’s move was going to payoff when the long-tined whitetail showed up within 10 yards of his new stand location. Unfortunately, overhanging limbs and dense cover prevented the patient bowhunter from getting a shot.

Early the next afternoon, Gordon quietly slipped back into the stand and trimmed some additional shooting lanes. As luck would have it, a front was moving in and Gordon was forced to face 40 mph winds. On the other hand, it was the last day of his hunt and he had to make something happen before time ran out. Before too long, a mature 8-pointer with a heavy rack walked directly to his stand. This buck was a shooter, but Gordon was again unable to release an arrow and things were starting to look pretty bleak.

At that moment, fate intervened, because the 10-pointer he had been waiting on suddenly showed up. Gordon quickly came to full draw, took one last deep breath and sent an arrow toward his target. Upon impact, the buck rushed about 35 yards before hitting the dirt. To top it off, the hunt was captured on video and he shared a deer camp with his all-time favorite professional baseball player Chipper Jones. There is a good chance that you’ll be able see the entire hunt unfold next fall on either “Buck Ventures” or “Major League Bowhunter.”

In the end, sticking to his stand until the last day and fighting tough conditions enabled Gordon to reverse a bad situation. Sometimes sucking it up and refusing to throw in the towel will be all it takes to shoot a giant. Way to hang in their Jason and congratulations on a successful hunt!