Spot and Stalk on a Colorado Velvet Muley

Andrew Munsell of Hamskea Archery took this beautiful velvet mule deer during an August bowhunt in Colorado. Andrew and his... 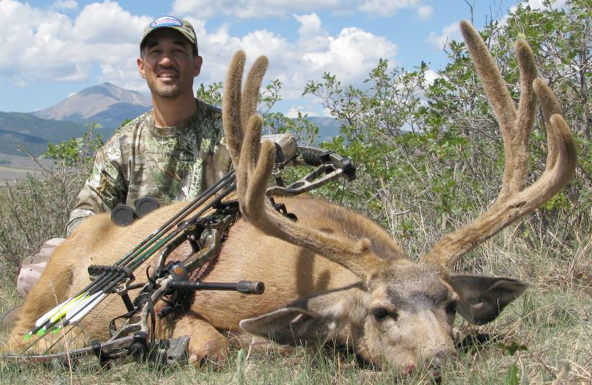 Andrew and his hunting partner, Jeremy, had done their homework and scouted the area putting together an inventory of bucks and determining which were in the best position for a stalk. Three days earlier, Andrew had spotted a group of mule deer bucks two miles away while glassing.

After watching several bucks in the 170s, Andrew was in position for the stalk. It was his third day in the mountains and time to close the distance on a group of three bucks.

Following an impressive stalk, Andrew ended up at 30 yards from the deer, but couldn’t get a shot. After two hours spent baking in the sun, his luck finally changed. Andrew came to full draw as one of the bucks presented an opportunity at 15 yards. He let the arrow fly and watched as it zipped through the deer. At the sound of the shot all three deer exploded out of the canyon. Andrew watched the deer bolt and lost sight of his buck in a fraction of a second as it disappeared into the thick brush.

With a full pass through, Andrew picked up his arrow and had enough sign to know he could get right on the blood trail.

It wasn’t long before he had the buck’s antlers in his hands – that part never get’s old.

When I asked Andrew if he knew how big the deer was when he shot it he said, “Yes … and no. I had been hunting some quality bucks for 3 straight days. There was one group that had three 170+ bucks in it. This particular day, I watched one of the bucks (The Grey Ghost is what we named him) hook up with two smaller bucks. The one I shot and a small forky. When I took the shot, I convinced myself that this buck was one of the 170+ bucks.”

The most memorable part of this hunt for Andrew wasn’t the deer’s score, but the effort that went into making this a successful hunt.

“I never harvest an animal without some serious effort put into it. By reflecting back on my efforts, it keeps me focused on how and what it takes to be successful in the future. Sticking it out and staying mentally strong are key elements. That and hunting with good friends … like Jeremy Munoz.”

Click here for more photos of big bucks in velvet.