At one time or another, all of us have endured a really bad day in the woods when nothing seems... 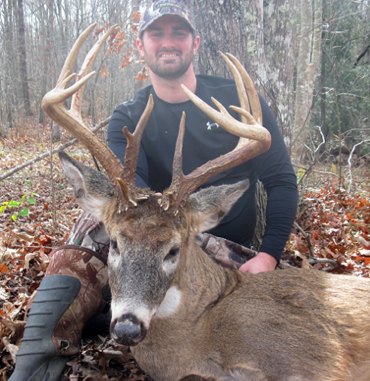 At one time or another, all of us have endured a really bad day in the woods when nothing seems to go our way. However, as hunters it’s important to understand that really bad luck can quickly change in the blink of an eye. The trick is to roll with the punches, keep a positive attitude and stay locked to your stand, especially during the rut. This is exactly what my good friend and cameraman Michael Petrey did this past weekend and his perseverance paid off with a really nice 20-point buck.

After a hectic work week, Petrey couldn’t wait to hit the woods on the opening day of gun season. For several days, he had been bowhunting a really good area that held at least two solid shooter bucks. Unfortunately, both of these top-heavy whitetails had managed to stay just out of range. During these October archery hunts, Petrey had monitored trail cameras, modified his hunting strategies and switched stand locations numerous times. With that being said, the hunter was fairly confident that all of his work would eventually generate a shot opportunity.

On opening morning, Petrey anxiously entered his setup well before daybreak. At first light, the loud roar of a truck in 4-wheel drive broke the early-morning silence. As luck would have it, another hunter was slinging mud and climbing up the same steep logging road that many of the deer were traveling. Ironically, the guy was putting on his off-road expedition at the same time the bucks had been pictured crossing the old dirt trail. At this point, Petrey took a deep breath and counted to 10. He tried to stay positive by telling himself at least one of the shooters might still show up later in the morning.

Unfortunately, his positive thinking only led to more bad luck on this particular hunt. About an hour after things had finally settled down, another ground shaking noise caught the hunter’s attention just below his setup. It was a guy loading dirt with heavy equipment on the neighboring property, which only added to the morning’s chaos. The rumbling engine, beeping back-up warning, and echoing thuds of the loader’s bucket bumping the dump truck ruined the rest of his hunt. Needless to say, the hunter never spotted a single deer during the first day of season.

Petrey’s bad luck seemed to continue the following morning when the wind suddenly changed directions right at daylight. At that moment, he began to wonder if a swarm of locusts was going to show up next. Without hesitation, he quickly changed setups and tried to put everything that had happened behind him. Upon switching locations, it was well after daybreak, but at least he had the wind in his favor.

In a few short minutes, Petrey’s string of bad luck finally shifted when he spotted a thick-racked buck following two slick-headed does. The lovesick bruiser stopped dead in the middle of a cleared shooting lane and stood broadside. One gentle squeeze of the trigger knocked the 20-point buck into the dirt and completely erased all of the hunter’s aggravating memories from the day before.

Way to hang in there Michael, and congrats on the awesome buck!