Buckling Down During the Rut Pays Off With Massive 9-Pointer

There’s something special about chasing thick-necked bucks during the rut. For the past couple of weeks, that’s what I’ve been... 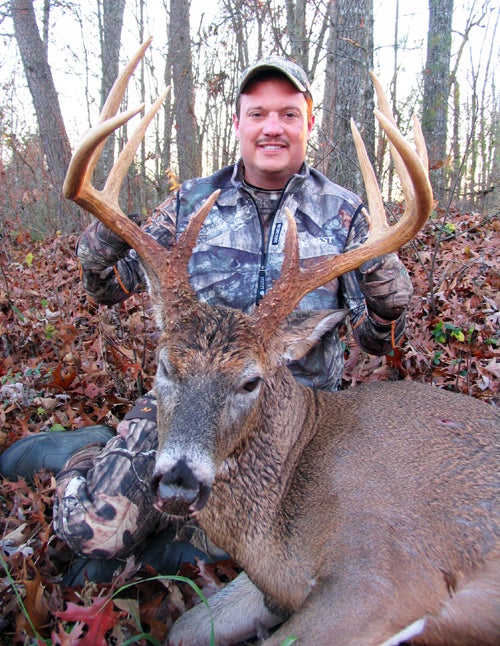 There’s something special about chasing thick-necked bucks during the rut. For the past couple of weeks, that’s what I’ve been doing in my home state of Kentucky and I’ve realized that the rut can be just as tough on hunters as it is for mature bucks.

A couple months of hunting hard have caught up to me, but everything finally fell into place when the top-heavy buck that I’ve been waiting on showed up during a cold and wet hunt this past Wednesday.

After passing on several deer, I began to wonder why the massive-racked 9-pointer had suddenly disappeared. For a little while, I thought that maybe another hunter had already tagged my buck, because the outside hunting pressure had really picked up.

On my Tuesday commute I saw rut activity all along the highway. Several deer had been hit, and I spotted two bucks chasing does. I decided to take a personal day to hunt the 9-pointer once more.

The weather forecast called for a cold front and showers, and the overcast conditions would have the big boys on the prowl. Upon entering my setup before daylight, I heard a buck grunting and chasing just below my stand for about twenty minutes. Unfortunately, there wasn’t enough light to pick up either in my scope. Nonetheless, I had a great feeling about being in the woods.

At daybreak, I caught movement to the left of my stand, making my heart skip. It was a slick-headed doe acting very funny! Every few steps she stopped to urinate, looking over her shoulder. Without hesitation, I positioned my shooting sticks toward the doe and waited. A deep-throated grunt caught my attention. I spotted a tall-racked giant easing out of the fog. The buck was 190 yards away, but I knew that he was my shooter.

A few more steps placed him in a narrow clearing, creating a brief window of opportunity. I set the crosshairs directly behind the buck’s shoulder and gently squeezed the trigger. The heavy-racked brawler instantly stood on his hind legs and crashed to the ground. Lucky for me, he slid on his back all the way down the mountainside. Needless to say, the buck was easier to haul out with my 4-wheeler. Hunts like these are exactly why I try to live in the woods when the whitetail rut is in full swing.

On that note, I would love to hear any of your rut-hunting reports. What are the deer doing in your home states and favorite hunting areas? Good Luck and good hunting!